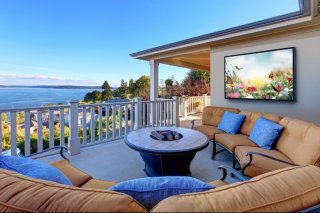 Having a summer party out on the deck with dozens of your friends feels at this point like both a distant memory, and something none of us will get to experience again or awhile.

But when the day finally comes when large groups can once again congregate together, you might be able to do it around a large outdoor television.

The audio and video brand Peerless-AV has announced the latest in its line of UltraView Ultra HD outdoor televisions. Not only is the 86-inch TV meant to survive different precipitation conditions but, per the company, the TV can withstand a temperature range of  -22°F to 122°F. This is thanks to aluminum-framed construction materials.

The 86-inch UltraView promises both 4K resolution and "brightness that is three times that of the average of indoor TV." There's also an ambient light sensor, which adjusts screen brightness based on lighting conditions.

Peerless-AV is known for its mounting products, and the new TV comes with a dedicated Outdoor Flat Wall Mount. Peerless had formerly supplied a company called Ciil Technologies and ended up acquiring that company in 2013, leading to Peerless' first outdoor display products.

A video on Peerless-AV's website warns against using an indoor TV outdoors, due to threats of electrocution when wet, as well as the real potential of doing damage to the TV itself, and the likelihood that the picture won't look right in the sun.

Peerless-AV has placed its products in such prominent places as Gillette Stadium, Busch Stadium, and the Kansas City Zoo.

“As the weather gets warmer, we are excited to offer an even greater design option to our award-winning UltraView UHD Outdoor TV solutions,”  Nick Belcore, Executive Vice President, Peerless-AV, said as part of the announcement. “Whether it’s an outdoor sports bar, throughout a stadium concourse, or in your backyard, the UltraView line is an ideal solution that provides customers with safe, enhanced options that are bright enough to be viewed in direct sunlight and intelligent enough to automatically adjust brightness for low light viewing.”

Based in Illinois, Peerless-AV is designated by that state as an essential business - under a provision allowing for "audio and video electronics" companies to continue doing business- and has therefore remained open during the coronavirus shutdowns.