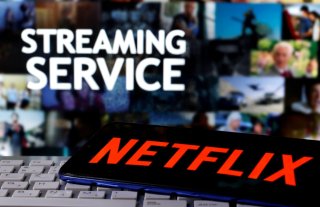 When the pandemic hit in 2020, the biggest story in the world of entertainment was the growth of streaming services. Americans, with nowhere to go and nothing else to do, stayed home and binged TV shows on streaming services. This was enough to turn Tiger King into a cultural phenomenon and send Netflix’s stock through the roof.

After the pandemic began to recede and restrictions were lifted in most places, people kept streaming, if not quite at the record levels of the pandemic’s early days. But now, almost two years after the debut of Tiger King, a new record has been set for streaming viewing.

The Gauge, Nielsen’s new “snapshot” report for streaming services, found that Americans watched a total of 183 billion minutes of streaming content during the week of Christmas. The previous record of 178 billion minutes of viewing was set during Thanksgiving of 2021. As the record for weekly streaming during the height of the pandemic never surpassed 160 billion minutes, it is clear that streaming has rapidly grown since March 2020. The holidays, clearly, encouraged a great number of people to watch shows and movies on streaming services while spending time with their families. The report also found that streaming made up a record-breaking 33 percent of all viewing during the week of Christmas.

“We came out of the peaks of Thanksgiving week, which is generally one of the biggest viewing weeks of the year, into a time when people were probably either catching up from the Thanksgiving time off, or preparing to take some time off at Christmas,” Brian Fuhrer, Nielsen’s senior vice president of product, strategy and thought leadership, said in a video released by the company. He noted that the Gauge added decimal points to its numbers for the first time, allowing the report to present more precise data.

As for individual shows, Nielsen’s streaming ratings were once again dominated by Netflix during the week of December 13, the most recent week with data available. Netflix’s The Witcher took the top spot on the originals list, with Disney+’s Hawkeye, Netflix’s Lost in Space, and Amazon’s Wheel of Time rounding out the top four shows. Shockingly, the rest of the shows in the top ten were all on Netflix. Other top Netflix shows included The Great British Baking Show, Selling Tampa, and Money Heist.

The acquired rankings, which include existing shows that streaming services have purchased the rights to, were also dominated by Netflix. Netflix shows such as Cocomelon and Seinfeld made up nine out of the top ten acquired shows.

The movie rankings, while still won by Netflix, had a more even breakdown. The Sandra Bullock Netflix thriller The Unforgivable was first, followed by Back to the Outback and The Shack, both of which are available on Netflix. Disney+ came in fourth and seventh with the holiday classics Home Alone and Home Alone 2: Lost in New York. Hulu took the fifth spot with another beloved Christmas classic, Elf, while Netflix was 6th with A California Christmas. Three more Netflix holiday films rounded out the top ten.

And while it was the signature show of the early pandemic period, Netflix’s second season of Tiger King, which arrived in November, doesn’t appear to have been nearly the ratings breakthrough as the original.