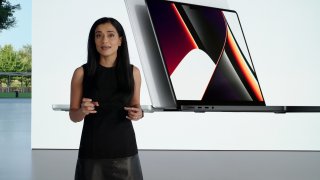 Apple held an event Monday, its second of the fall, following the September event that unveiled the latest iPhone lineup. In the “Unleashed” event, Apple debuted its new  M1 Pro and M1 Max chips, which will be featured in a new lineup of MacBook Pros.

“M1 has transformed our most popular systems with incredible performance, custom technologies, and industry-leading power efficiency. No one has ever applied a system-on-a-chip design to a pro system until today with M1 Pro and M1 Max,” Johny Srouji, Apple’s senior vice president of Hardware Technologies, said in the press release announcing them. “With massive gains in CPU and GPU performance, up to six times the memory bandwidth, a new media engine with ProRes accelerators, and other advanced technologies, M1 Pro and M1 Max take Apple silicon even further, and are unlike anything else in a pro notebook.”

Apple had announced back in 2020 that it would move away from Intel chips after twenty-five years, and would instead make its own chips, which it described as “Apple Silicon.” Later last year, it debuted the first computers with what it called the M1 chip, as part of the Mac Mini, a new MacBook Air, and a thirteen-inch MacBook Pro.

The first marquee product featuring the new product is the new edition of the MacBook Pro, which was also unveiled at the Unleashed event.

The new MacBook Pro line will be available in fourteen- and sixteen-inch models, and offers the  Liquid Retina XDR display, and a 1080p FaceTime HD camera. The thirteen-inch Macbook Pro will remain part of the lineup, the company said.

According to The Verge, the new MacBook Pro models will lose the Touch Bar, but will offer “an HDMI port, three Thunderbolt ports, an SD card slot, a headphone jack, and the return of the MagSafe charger.” The MacBook Pro line starts at $1,999 for the fourteen-inch, and at $2,499 for the sixteen-inch.

“We set out to create the world’s best pro notebook, and today we’re excited to introduce the all-new MacBook Pro with M1 Pro and M1 Max—a game-changing combination of phenomenal performance, unrivaled battery life, and groundbreaking features,”  Greg Joswiak, Apple’s senior vice president of Worldwide Marketing, said in the announcement. “The all-new MacBook Pro adds a breathtaking XDR display, more ports like MagSafe 3, an advanced 1080p camera, and a sensational six-speaker sound system, all in a stunning new design. The new MacBook Pro simply has no equal and is by far the best pro notebook we’ve ever built.”

The new MacBook Pro devices are available for preorder now and will arrive on October 26.

Also, at the event Tuesday, Apple unveiled a new generation of AirPods, the third.

“AirPods forever changed wireless headphones with their groundbreaking design, incredible sound, and magical experience,” Greg Joswiak, Apple’s senior vice president of Worldwide Marketing, said in the release. “We are excited to introduce the next generation of AirPods, featuring unrivaled sound through Adaptive EQ and spatial audio with dynamic head tracking, along with seamless interaction between Apple devices—making the world’s best-selling headphones even better.”

Also at the event, Apple unveiled the latest update to the HomePod Mini line, now coming in multiple colors, including yellow, orange, and blue. Those will arrive in November at a price tag of $99.

Apple announced the arrival of the Apple Music Voice Plan, described as “a new subscription tier for Apple Music designed around the power of Siri.” It costs $4.99 a month.

“Apple Music and Siri are natural partners and already work seamlessly together,” Oliver Schusser, Apple’s vice president of Apple Music and Beats, said in the announcement. “With Siri actively used on hundreds of millions of devices worldwide, we are thrilled to add this new plan that delivers an effortless music experience just by using your voice and makes Apple Music accessible to even more people around the world.”

“M1 changing the game for Apple on chip front. With Apple's new Silicon chips front and center Cupertino continues to refresh its hardware ecosystem across the board with today a long anticipated day for Mac Pro power users to finally get the the new Apple chips on board,” analyst Daniel K. Ives of Wedbush Securities said in a note after the event. “The proprietary M1 Pro/Max processor is the foundational part of this MacBook and ultimately we believe will be a game changer that will convert 30%+ of current MacBook users to upgrade over the next year catalyzing growth on this hardware segment.”