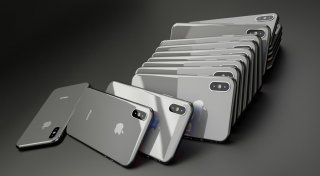 Following Apple's annual World Wide Developers' Conference, a major analyst is saying that the company could reach a $2 trillion valuation next year- and that Apple may be able to release this year's iPhones in September, amid speculation about delays.

Analyst Daniel Ives of Wedbush Securities said in a note this week that he is raising his Apple price target to $425, and maintaining his "outperform" rating.

"We believe during 2021 Apple has strong potential to be the first $2 trillion valuation given the 5G tailwinds and services momentum potential over the coming years. In particular, we are seeing a continued demand snapback in China despite some speed bumps and the stage is setting for a massive pent up iPhone 12 cycle heading into the Fall in this key region as well as globally," Ives and Strecker Backe wrote in their note.

Apple became the world's first trillion-dollar company in August of 2018. As of Thursday afternoon, its stock is trading at $361 a share, and its market cap is at $1.565 trillion, making it the world's most valuable company.

"The supply chain getting back to normalization ahead of expectations has been impressive and now ultimately puts Cook & Co. back in the drivers seat to launch this 5G cycle in its typical mid-late September timeframe," the analyst wrote. "Although there has been some noise about the 5G component of this iPhone product cycle, we are hearing from suppliers this launch globally and within the US is right on target and sets the stage for Apple to go after this transformational multi-year 5G market opportunity."

Apple recently re-closed Apple Store locations in some states, due to renewed concerns about coronavirus, and announced this week that it's also closing stores in the Houston area, due to that city's outbreak.

The conference, which was held virtually due to the pandemic, included several big announcements, most notably that Apple is dumping Intel chips for its Mac computers, and will instead use what it calls Apple Silicon.

Stephen Silver, a technology writer for The National Interest, is a journalist, essayist and film critic, who is also a contributor to Philly Voice, Philadelphia Weekly, the Jewish Telegraphic Agency, Living Life Fearless, Backstage magazine, Broad Street Review and Splice Today. The co-founder of the Philadelphia Film Critics Circle, Stephen lives in suburban Philadelphia with his wife