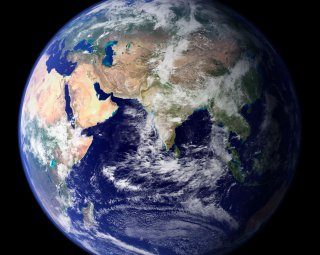 Astronomers have announced the discovery of a rocky Earth-like planet orbiting a star that is a tenth of the size of our sun—and incredibly, it is located 25,000 light-years away.

Although it hasn’t been officially confirmed, it could be the most distant Milky Way exoplanet discovered yet.

The exoplanet was pinpointed by astronomers from the University of Canterbury, New Zealand, who noted that it was a “one in a million discovery.” The study has been published in The Astronomical Journal.

This breakthrough is of particular interest because only about a third of the 4,000 exoplanets discovered to date have rocky surfaces, and even fewer share a similar orbit to that of Earth, the research team said.

The astronomers said the star the planet orbits around is so tiny that they weren’t able to confirm if it was a brown dwarf, a substellar object that is too large to be called a planet and too small to be a star. Another theory is that the planet could be orbiting a star in the Galactic Bulge, a region that is densely populated with stars in the center of the Milky Way.

The study’s lead author Dr. Antonio Herrera Martin said it took the team members five days to observe the host star, and they eventually witnessed a small distortion that lasted about five hours. “After confirming this was indeed caused by another ‘body’ different from the star, and not an instrumental error, we proceeded to obtain the characteristics of the star-planet system,” he said in a statement.

In observing the exoplanet and its star, the research team also tapped into gravitational microlensing, which is based on the predictions of general relativity. Microlensing is a form of gravitational lensing in which the light from a background source is bent by the gravitational field of a foreground lens to create distorted and magnified images.

“The combined gravity of the planet and its host star caused the light from a more distant background star to be magnified in a particular way,” Martin said.

“We used telescopes around the world to measure the light-bending effect.” This exoplanet hasn’t been named yet, but the microlensing event that led to its discovery is now known as OGLE-2018-BLG-0677.