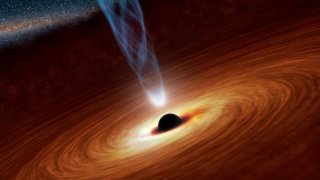 European astronomers have discovered the closest black hole to Earth yet—and it was hiding in plain sight only 1,011 light-years away.

This relatively nearby black hole was pinpointed in a star system called HR 6819, and it is about four times the mass of our sun, according to the findings published in the scientific journal Astronomy & Astrophysics.

NASA says a black hole is the end result of the collapse of a massive star, in which a great amount of matter is packed into a tiny area with a gravitational field so strong that nothing—not even light—can escape.

“We were totally surprised when we realized that this is the first stellar system with a black hole that can be seen with the unaided eye,” Petr Hadrava, co-author of the study and emeritus scientist at the Academy of Sciences of the Czech Republic in Prague, said in a statement.

The discovery of the HR 6819 black hole, which is located in the constellation Telescopium in the Southern Hemisphere, hints that there are plenty more waiting to be found.

Astronomers have asserted that there are between 100 million and 1 billion of these objects in the Milky Way galaxy alone. Like many of those black holes out there, the discovered black hole is quite tiny—about 25 miles in diameter.

The previous closest black hole is likely three times farther away, about 3,200 light-years, according to European Southern Observatory astronomer Thomas Rivinius, who led the study.

Scientists stumbled upon the finding while tracking two stars—with the help of a telescope at the European Southern Observatory’s La Silla Observatory in Chile—orbiting each other just out of the reach of the black hole’s gravitational pull.

Despite the fact that most black holes are invisible, scientists managed to capture the first image of one only last year. This supermassive black hole, containing the same mass as 6.5 billion suns, is located more than 50 million light-years away in the elliptical galaxy named Messier 87.

Based on the cosmic distance scale, one light-year equals 5.9 trillion miles.

The amazing image was achieved through the Event Horizon Telescope project, a global collaboration of more than 200 scientists using an array of observatories scattered around the world. Combined, this array acts like a telescope the size of planet Earth.