California Will Not Allow Sales of Gas-Powered Cars (In 2035) 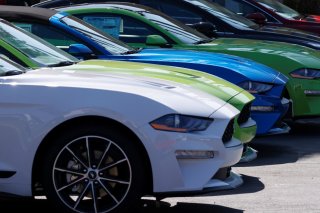 In his 1992 book “Earth in the Balance,” Sen. Al Gore, who was elected vice president later that year, proposed phasing out the internal-combustion engine within twenty-five years. As The Washington Post reported in early 2000 Gore, who was running for president that year, reiterated that proposal, which caused a minor controversy at the time.

In the two decades since, there’s been much innovation in the field of electric cars, including the rise of Tesla, while at the same time the problem of climate change has gotten worse. And now, the nation’s largest state has announced plans to do something like what Gore suggested.

Gov. Gavin Newsom of California this week issued an executive order which will phase out the sale of gasoline-powered cars in the state by 2035. Sales of the cars must be zero-emission by that year, which is fifteen years away.

Gasoline-powered cars will not be banned from California’s roads in 2035, but they will not be allowed to be sold beyond that year.

“This is the most impactful step our state can take to fight climate change,” Governor Newsom said in a statement. “For too many decades, we have allowed cars to pollute the air that our children and families breathe. Californians shouldn’t have to worry if our cars are giving our kids asthma. Our cars shouldn’t make wildfires worse—and create more days filled with smoky air. Cars shouldn’t melt glaciers or raise sea levels threatening our cherished beaches and coastlines.”

The governor directed the California Air Resources Board to “develop regulations to mandate that 100 percent of in-state sales of new passenger cars and trucks are zero-emission by 2035—a target which would achieve more than a 35 percent reduction in greenhouse gas emissions and an 80 percent improvement in oxides of nitrogen emissions from cars statewide.”

Fifteen nations, the governor said, have taken this step before, although California is the first U.S. state to do so. The state, in 2019, had banned government purchases of most gas-powered cars.

The change did draw some questions as some wondered how California, which in the past has had trouble with rolling blackouts, will manage to find the electricity to power electric cars for the entire state. The state, however, will have fifteen years to solve that problem.

“With the climate crisis wreaking havoc, CA is once again stepping up its leadership,” the former vice president tweeted Thursday. “Kudos to @GavinNewsom for responding to this crisis and setting a zero-emission mandate for all new passenger vehicles by 2035. Clean technology is here. Let’s use it.”