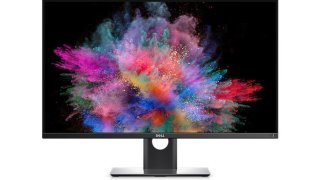 For much of the past decade, OLED panels, with their unrivaled picture quality, have fundamentally changed the cutthroat world of HDTVs.

As smartphones and tablets have also tapped into this next-gen technology, the next big bet has already been placed on computer monitors, which could boost the visual experience of work-related projects and graphically intensive games.

OLED monitors have been slower to arrive on the market compared to their TV counterparts, and much of that reason has to do with price. In early 2016, Dell revealed the world’s first OLED monitor, the Ultrasharp UP3017Q, which was slated to launch with a $4,999 price tag. Then Dell suddenly scrapped those plans, only to return a year later to sell the product for $3,499.

Even today, it’s not unheard of for these monitors to reach $2K, so finding a consumer base willing to shell out that kind of money will continue to be a challenge. OLED TVs are an easier sell because of their wide-ranging use, but there is one nagging problem that continues to haunt every OLED panel out there—burn-in.

Ultimately, the dilemma is that all organic light-emitting diode screens—whether they are on LG or Apple devices—can suffer from burn-in. And from what studies have shown, OLED screens are more susceptible to this particular issue than standard liquid crystal displays, which long have been the go-to tech for computer monitors.

Burn-in occurs whenever a persistent part of the image of a screen, such as a channel logo or a scoreboard from a sports game, remains as a ghostly background no matter what else is being shown on the screen. These static image elements have “worn out” certain areas of an OLED screen’s organic materials faster than the rest of the screen. There is no getting around the fact that this issue affects OLED monitors because they share the same display technology with OLED TVs.

Yet, as annoying as this can indeed be, OLED burn-in will likely not happen with normal use. In fact, most burn-in is actually image retention, which often disappears after a few minutes. Keep in mind that in most cases, you’ll witness image retention long before it becomes permanent burn-in. It’s also a good idea to take proper precautions, such as making an effort to routinely change the channel, to avoid the hassle of dealing with burn-in.

If the potential risk of burn-in stopped you from purchasing an OLED TV in the past, you’ll probably want to stay away from OLED monitors as well. You’ll surely save big money but will miss out on all of the visual goodness that these panels offer.