Can't Afford a OLED or a Samsung QLED? TCL's 65-Inch 6-Series QLED Might Be the Answer 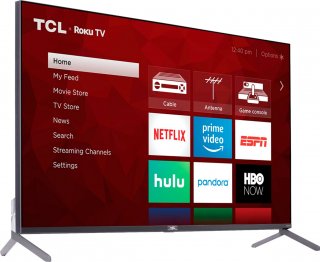 If you’ve had your sights set on a Samsung QLED HDTV but just couldn’t pull the trigger due to the high price points, the TV gods may have just presented an opportunity you just can’t refuse.

Sure, it’s not an offering by the reputable Korean tech giant, but it is the next best option available among QLED HDTVs. Just head over to Amazon, and you’ll see that the TCL 65-inch 6 Series 4K QLED Roku TV is currently retailing for $800—a staggering 27% off the regular price.

Within the past year, the 6 Series really has become the go-to TV for anyone seeking top-notch picture quality and a built-in Roku interface. This highly regarded set features 4K UHD picture with the much-coveted QLED color technology and Dolby Vision HDR.

In order to use these quantum dots (more often associated with Samsung’s TVs), the 6 Series comes with a layer of nanoscale semiconductors in the screen that produces exceptionally vivid red, blue and green light. This next-gen tech really does a marvelous job in producing the best and brightest colors you can achieve with an LED-backlit LCD display.

As many reviewers would likely agree, OLED panels are probably the only technology today that can dethrone quantum dots—but you’ll also be shelling out at least several more hundreds, if not thousands, of dollars.

The contrast of the TV is indeed remarkable for the price you’re paying. Its ability to showcase the deepest of blacks, in addition to the exceptional brightness level (great for sun-drenched rooms and daytime viewing), really separates it from other quality offerings in the similar price range.

If you’re one of the millions out there who already can’t live without Roku, you’re definitely in luck—it comes built-in with the TV. Because of its incredibly intuitive and user-friendly interface, it really is a breeze to quickly find what you want to watch for family movie nights. Toggling between your apps and devices is also a snap, as you don’t have to physically deal with all of the buttons and switches of separate devices.

The streaming offerings on Roku are plentiful (likely more content than you can possibly handle), giving you simple access to just about every app available, including the usual favorites Netflix, YouTube, Amazon Prime Video and Hulu. Also know that since the apps are built-in, you can get to them faster and more easily than via an external streamer. For those of you who want to always keep that seat warm, the voice-search functionality on the remote control works like a charm as well.

Can’t forget about all you diehard gamers out there waiting patiently for the next-gen consoles from PlayStation and Xbox. The advice is that you can probably stop using monitors that are dedicated for that specific purpose. The 6 Series features extremely short lag times and does a fantastic job in smoothing out heavy action—perfect for first-person shooter and sports games.