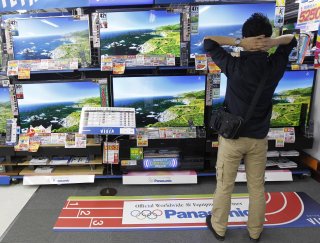 Panasonic doesn’t sell TVs in the United States anymore and hasn’t for a few years now. But that didn’t stop the Japanese brand from introducing a new flagship OLED TV on Monday, during Media Day at International CES.

The new OLED TV from Panasonic for 2021 is called the JZ2000, and it will arrive in fifty-five- and sixty-five-inch sizes. Somewhat intriguingly, the press release states that distribution “is not yet finalized for the US market,” indicating that perhaps it may be arriving on American shores after all.

The new TV, the press release stated, features a new AI-driven processor, side-firing speakers, and other cutting-edge features. And as for the OLED itself, the new TV sports Panasonic’s proprietary Master HDR OLED Professional Edition panel.

“The JZ2000 is a symbol of what we at Panasonic want to achieve,” Yasushi Murayama, an executive of product strategy for Panasonic’s Visual and Sound Business Unit, said as part of the announcement.

The HCX Pro AI processor figures out what type of program the viewer is watching, and adjusts settings accordingly.

“Building on the superb accuracy which makes Panasonic’s TVs ideal for watching films, we are further improving the experience in other areas such as gaming too. Through the use of AI, we want our viewers enjoy the best picture and sound settings automatically. Our aim is simply to support our customers to really, truly experience their favorite contents. Whether they are into films, games, sports, or something else, we want them to enjoy heightened visual and aural experiences which leave them feeling happy and satisfied.”

Also at CES, Panasonic teamed up with Klipsch and Dolby Atmos to present a proof of concept vehicle.

“I have personally participated in bringing to market a range of products which feature Dolby Atmos capability.  The sonic realism and envelopment of the listener into the on-screen action for films opens up new dimensions of entertainment,”  Mark Casavant, vice president of Brand & Business Development, Klipsch Group, said in Panasonic’s announcement.

“Working with the audio experts at Panasonic Automotive we have achieved a similar experience for the in-vehicle listener with Dolby Atmos music. The music is more immersive, with additional space clarity, and depth.”

Later in the virtual show, Panasonic will host an “immersive concert experience” with the band Cold War Kids. It’s described as a “multidimensional listening and viewing experience,” featuring various Panasonic products. They will also feature a group of athletes who endorse Panasonic, including decorated Olympic swimmers Michael Phelps and Katie Ledecky, in panels.