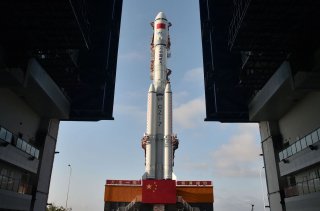 Earlier this week the sky was falling—or at least what went up did come crashing down when a Chinese heavy-lift rocket made an uncontrolled descent back to Earth.

At nearly 18 tons, it was one of the largest pieces of space debris ever to fall uncontrollably back to Earth, and it passed directly over Los Angeles and New York City before landing in the Atlantic Ocean off the northwest coast of Africa. However, some reports suggested that some of the debris may have hit two villages in the West African country Côte d’Ivoire (Ivory Coast).

China had launched the Long March-5B rocket, which was carrying an unmanned prototype spacecraft into orbit, on May 5 from the Wenchang Space Launch Center in the Hainan province. Unlike rockets that have a first stage that propels them for the first few minutes after launch with a second stage that aids the payload in reaching orbit, the Chinese Long March-5B utilizes a single core stage along with four boosters that propelled it off the launch pad.

The rocket’s empty core stage is now the largest piece of space debris to fall uncontrolled back to Earth since 1991 and is the fourth largest ever. The only pieces larger were NASA’s Skylab in 1979, Skylab’s rocket stage in 1975 and the Soviet Union’s Salyut 7 in 1991.

It was widely reported that for a few “tense hours” the re-entry path and eventual landing site were actually a mystery to those tracking its fall.

Predicting where this rocket would come down was difficult due to its decaying orbit, which made it complicated to track. Predictions spanned from sites such as New York City to New Zealand! The U.S. Air Force’s 18th Space Control Squadron, which tracks manmade objects in orbit, confirmed that the rocket did reenter over the Atlantic at 11:33am ET on Monday, May 11.

“For a large object like this, dense pieces like parts of the rocket engines could survive reentry and crash to Earth,” Jonathan McDowell, astronomer at the Harvard-Smithsonian Center for Astrophysics, told CNN. “Once they reach the lower atmosphere they are traveling relatively slowly, so worst case is they could take out a house.”

While fortunately the space debris didn’t take out a house and no one seemed to have been hurt, local media in Côte d’Ivoire reported that mysterious metallic objects rained down from the sky. Some of the parts were reportedly as long as 12 meters or roughly 39 feet. Photos from social media platforms including Facebook and Twitter showed what resembled a long metal pipe that was found by residents of the village of Mahouno.

Locals also reported loud sonic booms, flashes and notably the falling debris around the time the rocket would have passed over them. McDowell, who tracked the rocket’s descent, said the village was in line with rocket’s path and that it is possible some debris made it inland.

“When you have a big chunk of metal screaming through the upper atmosphere in a particular direction at a particular time, and you get reports of things falling out of the sky at that location, at that time, it’s not a big leap to connect them,” McDowell added to The Verge.

McDowell also suggested that China may have had a plan to de-orbit the core stage and that something went wrong, but China isn’t exactly known for having what could be described as a “good track record” when it comes to making sure its rocket launches won’t come down unexpectedly on populated areas. Unlike with the United States, which launches over the ocean, China has often launched its rockets over land, resulting in reports of parts coming down on areas with people!

This is only the most recent incident of a Chinese rocket falling uncontrolled to Earth. In March, a Chinese Long March-3B booster crash-landed downrange in Guizhou province, while last year another Long March-3B rocket dropped sections of its boosters on settlements near the launch site; and in 2018 a Long March-3B booster fell to the ground and exploded near a town in Guangxi province. One of the concerns of such crashes isn’t just the dangers from the falling debris, but the fact that these boosters can contain traces of the toxic propellant hydrazine.