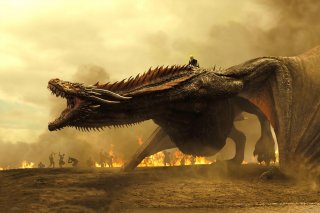 "Game of Thrones," by most measures the most popular HBO show of all time, wrapped up its eight-season run in the spring of 2019. But that doesn't mean we've seen the last of the Seven Kingdoms on HBO.

HBO was known to be working on multiple potential spinoffs of "Game of Thrones," with as many as four in the works at one point. The network at one point moved forward with casting on a prequel series, which was to star actress Naomi Watts, but HBO announced last fall that that project was dead.

However, another "Game of Thrones" prequel series is very much alive, and has begun casting.

According to Entertainment Weekly, the upcoming show is called "House of the Dragon." It's set 300 years before the events of the main "Game of Thrones" series, and is based on a George R.R. Martin side novel called "Fire & Blood," which deals with the history of House Targaryen. That book covers hundreds of years worth of action.

"Game of Thrones" showrunners D.B. Weiss and David Benioff are not involved with the new series, having agreed to a deal with Netflix. Ryan Condal will serve as the showrunner, while Miguel Sapochnik, who directed most of the battle-focused episodes of "Game of Thrones," will direct the pilot.

Casting is beginning now, but it's unclear when filming of the new series is set to get underway.

The new show, which has a ten-episode commitment, is set to arrive in 2022, and will appear on both HBO and HBO Max. The entire run of “Game of Thrones” is currently available to stream on all of HBO’s streaming products.

Meanwhile, the complete series 4K Blu-ray Disc set for the original "Game of Thrones" is set to arrive on November 3, and can be preordered from Amazon now, with a listed price of $209.99. Previously only the first and eighth seasons of “Game of Thrones” had only been available on that format, although the complete series can be ordered on both DVD and standard Blu-ray Disc.