As Cord-Cutting Accelerates, ESPN to Lay Off 300 People 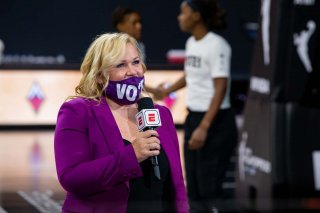 Several major trends affecting the media business in the pandemic year of 2020—the decline of cable TV, the disappearance of sports for several months, the lower ratings of sports once they returned, and the corporate struggles of the Walt Disney Company—have combined to hurt ESPN.

The sports media giant announced Thursday that it is laying off around three hundred people. Most of the people who are being let go are not well-known on-air talent, but the company added that some on-camera employees will not have their contracts renewed. In addition, the company will leave hundreds of vacant positions unfilled.

“For some time, ESPN has been engaged in planning for its future amidst tremendous disruption in how fans consume sports. The pandemic’s effect on ESPN clearly accelerated our thinking on all fronts. Today, as a result of these circumstances, we informed our employees that we have made the difficult decision to reduce our workforce to create a more agile, efficient organization,” Jimmy Pitaro, ESPN’s chairman, said in a press release.

“We are parting ways with many exceptional teammates, all of whom have made important contributions to ESPN. These are not easy decisions, and we will work hard to make their transitions easier. We will move forward in a manner that will allow us to continue to best serve sports fans.”

“The speed at which change is occurring requires great urgency, and we must now deliver on serving sports fans in a myriad of new ways,” he said. "Placing resources in support of our direct-to-consumer business strategy, digital, and, of course, continued innovative television experiences, is more critical than ever.”

An additional report by The Athletic stated that the layoffs are expected to strike remote production and that the network may phase out many of its talk shows, with the exception of popular shows like Pardon the Interruption, First Take and Around the Horn.

It’s not the first round of layoffs for ESPN; they also let go of employees in 2015 and 2017. ESPN has attempted to mitigate the effects of cord-cutting, including with the launch in 2018 of ESPN+, its streaming service, which is now sold in a bundle with Disney+ and Hulu. ESPN+ had 8.5 million subscribers as of August.

There were no sports on television between the shutdown of sports in March and their return at the end of the summer, and once they returned, ratings were subpar, especially for the NBA and Major League Baseball. Opinions have differed as to the reason for that.

Disney, which recently announced a corporate restructuring in order to emphasize streaming, will announce its third-quarter earnings on Nov. 12.