Donald Trump Wants You To Dump Comcast (He Calls Them 'Concast') 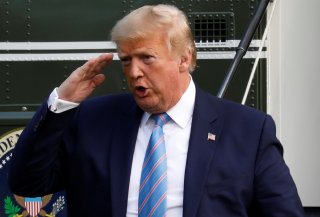 It’s not generally a function of the sitting president of the United States to give the nation advice in choosing a cable provider. President Trump, however, is nothing if not a habitual shatterer of presidential norms.

The president, at 7:29 a.m. on Saturday, suggested that his more than 82 million Twitter followers should drop Comcast, which he referred to as “Concast.”

“Concast is known for its terrible service. On top of that they provide FAKE NEWS on MSDNC & @NBCNews. Drop them and go to a good provider!”

Trump’s tweet was targeted less towards the quality of Comcast’s cable service than to its ownership of news outlets MSNBC and NBC News. It also quote-tweeted a more than three-year-old tweet from former Arkansas governor and presidential candidate Mike Huckabee, who is notorious for using his Twitter account to post hackish jokes.

“Mafia better service than @comcast,” Huckabee had tweeted in April of 2017. “Sure they shoot you, but it’s over with and they don’t charge you for the bullet.”

Trump has a long history of tweeting critical things about the corporate owners of news channels that report negatively about him. More often, he is critical of CNN, which is owned by WarnerMedia; in 2017, he reportedly sought unsuccessfully to block AT&T and WarnerMedia’s merger.

It’s not known whether Trump is himself a subscriber to Comcast at any of his residences. A story in The Verge from 2018 pointed out that the president was photographed in a television interview using a DirecTV Genie remote at the White House. This indicates that, despite previous reports about Trump using a “super TiVo” to watch and DVR television, the White House most likely actually uses DirecTV’s Genie multiroom DVR system. It is possible, though, that this setup has changed in the last two years.

After Trump’s “Concast” tweet, some commentators questioned whether the message was irresponsible, if not hypocritical or even illegal. Others noted that while Comcast owns MSNBC and NBC News, those channels are carried on every cable provider, not just Comcast, so switching to a different provider would not cost those channels subscribers.

“Your FCC chair gutted #NetNeutrality and handed “Concast” the power to censor the Internet,” Evan Greer tweeted. “Maybe do something about that instead of spewing racist nonsense and saber rattling about Section 230?”

Even prior to Trump’s tweet, Comcast lost a tremendous amount of pay TV subscribers in the first quarter of 2020, shedding over 400,000. The company did, however, gain more than that number in net internet subscribers.