Expensive HDMI Cables: Just a Scam or a 4K Necessity? 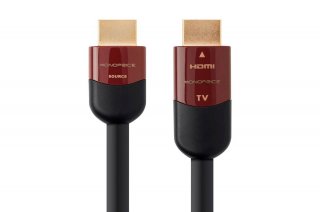 As each year passes, TVs just seem to be getting better and better. But how many more pixels can you fit into a screen? And can you have a video processor so powerful that it’s considered overkill? And what about those HDMI cables? They, like their TV components, seem to be next-gen every few years as well.

There’s no question that TV manufacturers will find ways to fit in more pixels and build faster video processors. But for HDMI cables, no matter if you spent $5 or $50 on them, the picture quality on your TV will be basically the same. So, the short answer is this: You do not need to overspend on HDMI cables.

HDMI is the established standard for sending over via one cable both video and sound from a home entertainment device to a TV. By far, it is the best way to hook up DVD and Blu-ray players, game consoles and streaming media devices. Within the past decade, there have been several specifications attached to HDMI cables, and these are what have largely confused some people. But for most when they are shopping for one, these details can be effectively ignored.

HDMI 1.4 specification was first released about 10 years ago. It was designed to look forward to 4K and to set certain criteria to enable support for it in the future. Then in 2013, HDMI 2.0 specification was released, which increased the maximum bandwidth of these cables from 10.2Gbps to 18Gbps. This further paved the way for increased 4K support and laid the groundwork for 8K.

Then in 2018, HDMI 2.1 came onto the market. These cables were designed to support 8K and higher resolutions with a maximum bandwidth of 48Gbps. The HDMI 2.1 specification can handle 4K and 8K videos up to 120 frames per second. However, currently, this is a bit of overkill since there is a dearth of products and devices in 8K.

The cables themselves aren’t making the picture any better for you. If your device is transmitting data in 4K, then your HDMI cable should be able to carry that information to your TV. It doesn’t matter if the HDMI cable is labeled High Speed, Premium High Speed or Ultra High Speed. There are no picture-quality upgrades occurring while the data is being transmitted through the HDMI cable.

Keep in mind that, theoretically, a more expensive HDMI cable might have fewer errors while transmitting data, but this is entirely different than having better picture quality. With a digital signal, everything is sent as 0s and 1s. You can get an error if a 1 is received as a 0 or a 0 is received as a 1. In this way, an HDMI cable can either correctly transmit everything or it can have errors.