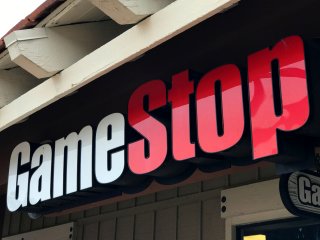 For much of the last few years, GameStop has been seen as a declining brick-and-mortar retailer. For the entire first half of 2020, its stock was trading for less than $10 a share, even as the pandemic led to a surge in the usage and popularity of video games. GameStop, in the early days of the pandemic, got a wave of bad press for declaring itself “essential,” and for one store reportedly ordering employees to return to work with their hands wrapped in plastic.

A company that’s in two businesses—retail and physical media—that are both in long-term decline, GameStop would seem an unlikely candidate to experience a massive rise in its stock.

But just that has happened since late last week, as GameStop’s stock has surged so high that trading was temporarily halted both Friday and Monday. The stock, which was trading at under $20 as recently as a week ago, hit $61.50 on Jan. 20, before jumping over $100 on the 22nd, and as high as $119 a share on Monday, before dropping down to the high 90s as of midday.

What caused the unprecedented surge, which brought GameStop’s stock to an all-time high? A short squeeze, with a group of short-sellers on one side, and a group of Reddit users, on the community page known as WallStreetBets, on the other.

It’s the sort of story that seems lifted straight from the TV series Billions and seems destined to become the subject of a book by Michael Lewis, and an inevitable subsequent movie adaptation. It also appears likely to kick off a round of think-pieces about the democratization of investing, as well as the untapped power of nonprofessional investors gathering in online spaces.

The story, according to Yahoo Finance, is that short-seller Citron Research last week listed reasons why GameStop’s stock would drop. WallStreetBets, however, took the other side—joined by, according to some reports, posters on Twitter and TikTok—and this led to the short squeeze, which forces short sellers to buy more stock, and therefore sent the price higher.

Citron, meanwhile, later announced that there were attempts to hack its Twitter account and that threats had been made against employees of the firm.

“The sudden, sharp surge in GameStop’s share price and valuation likely has been fueled by a short squeeze, given the high short interest, and, to a lesser degree, speculation by retail investors on forecasts for the new gaming cycle and the involvement of activist RC Ventures,” Telsey analyst Joseph Feldman said in a note, as quoted by CNBC.

“We believe the current share price and valuation levels are not sustainable, and we expect the shares to return to a more normal/fair valuation driven by the fundamentals.”

Other analysts described the stock’s fundamentals as “terrible.”