Fake Contact Tracing Apps Could Install Malware on Your Smartphone 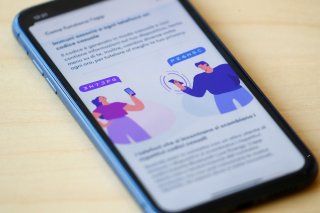 Smartphone users looking to participate in contact tracing to prevent the spread of coronavirus should keep an eye out for fake apps that are in fact out to infect their phones with malware, and possibly even steal from them.

That's according to research released this week by the Anomali Threat Research Team.

"These apps, once installed on a device, are designed to download and install malware to monitor infected devices, and to steal banking credentials and personal data. The wider security community continues to monitor ongoing malicious activity themed around COVID-19."

The apps have been spotted in 12 countries - Armenia, India, Brazil, Chhattisgarh, Columbia, Indonesia, Iran, Italy, Kyrgyzstan, Russia, and Singapore - but not in North America. The apps are not currently present in the Google Play store.

Contact tracing methods have been utilized around the world as a method to prevent the spread of coronavirus, though the efforts are considerably difficult and time-consuming. The state of South Carolina, in particular, has launched a particularly robust program, with a goal of conducting 220,000 tests in May and June.

However, the tracing efforts have run into some complications. Most states, per Business Insider, have not signed up for Apple and Google's contact tracing program, with only three on board as of earlier this week.

And in addition to the malware apps, scammers have been trying to pull people into cons involved fact contact-tracing.

“Legitimate contact tracers will never ask for personal information such as your Social Security number or financial information,” Xavier Becerra, the attorney general of California, said in a statement, per the San Jose Mercury News.

“It sickens the soul that there are people out there who make it their business to scam you as most of us seek to band together to respond to the coronavirus pandemic.” In addition, per the San Jose Mercury News, some contact tracing programs are having trouble hiring enough people for the job.