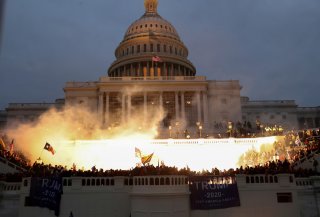 Prior to Wednesday’s inauguration of President Joseph Biden, the Federal Communications Commission issued a warning that those with amateur and radio services licenses could not use such equipment in order to “commit or facilitate criminal acts.”

The warning, from the FCC’s Enforcement Bureau, came less than two weeks after the riot that took place at the Capitol on the day of the Electoral College vote count on Jan. 6. This was followed by the social network Parler being taken down by the Apple and Google app stores and Amazon Web Services, as well as greater law enforcement scrutiny of possible extremist activity on other social media and discussion platforms.

“The Bureau recognizes that these services can be used for a wide range of permitted purposes, including speech that is protected under the First Amendment of the U.S. Constitution.  Amateur and Personal Radio Services, however, may not be used to commit or facilitate crimes.”

The FCC went on to warn that those in violation of such rules “may be subject to severe penalties, including significant fines, seizure of the offending equipment, and, in some cases, criminal prosecution.”

The inauguration ceremonies for Biden went off without any incident, nor did any worries about unrest at state capitols come to pass on Inauguration Day.

Speaking of Biden and the FCC, the Biden administration began without the new president having named a nominee to serve as FCC chairman. The two current Democratic FCC commissioners, Jessica Rosenworcel and Geoffrey Starks, have been often mentioned as possible nominees by the president. The FCC, during the Biden administration, its expected to deal with such issues as the continuing rollout of 5G, spectrum allocation, the possible return of Obama-era net neutrality rules, and possibly the thorny issue of Internet content moderation. A controversial Trump appointee, Nathan Symington, was confirmed to the FCC in December.

Meanwhile, the Trump administration’s FCC chairman, Ajit Pai, departed the position on Inauguration Day, as he had announced he would the previous month.

“Over the past four years, we have delivered results for the American people, from narrowing the digital divide to advancing American leadership in 5G, from protecting consumers and national security to keeping Americans connected during the pandemic, from modernizing our media rules to making the agency more transparent and nimble.  It has been a privilege to lead the agency over its most productive period in recent history,” Pai wrote in a goodbye letter published on Wednesday.