Forget Venus: Did We Already Find Life on Mars in the 1970s? 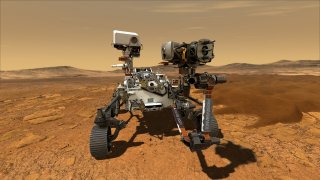 The search for life in our solar system received a major boost recently when phosphine gas was detected in the hot, poisonous atmosphere of Venus.

The reason for the excitement is that here on Earth, this particular gas can be made naturally by some species of anaerobic bacteria—organisms that live in the oxygen-starved environments of landfills and even the guts of animals.

If such signs of life are apparent on Venus, then there seems to be hope yet in eventually finding living organisms on Mars.

But have we done so already?

During NASA’s Viking mission to the Red Planet in 1976, the initial results of the Labeled Release (LR) life-detection experiment showed something remarkable—the data revealed the presence of microbial respiration.

It appeared as if the ultimate question finally had been answered.

But it all crashed down in an instant when the Viking Molecular Analysis Experiment failed to detect any signs of organic matter, which drove NASA to conclude that the LR had discovered a substance that only mimicked life—not life itself.

“Inexplicably, over the forty-three years since Viking, none of NASA’s subsequent Mars landers has carried a life detection instrument to follow up on these exciting results,” Gilbert Levin, the principal investigator of the LR experiment on NASA Viking missions to Mars in the 1970s, said in an op-ed published by the Scientific American.

“Instead the agency launched a series of missions to Mars to determine whether there was ever a habitat suitable for life and, if so, eventually to bring samples to Earth for biological examination,” he said.

NASA, however, has continued to say that the search for alien life is a high priority and has plans to eventually send astronauts to Mars.

“Any life there might threaten them, and us upon their return,” Levin said. “Thus, the issue of life on Mars is now front and center.”

He also cited NASA scientist Chris McKay, who once said that Mars and Earth have been “swapping spit” for billions of years. Whenever either planet is struck by comets or large meteorites, some of the material is ejected into space.

“A tiny fraction of this material eventually lands on the other planet, perhaps infecting it with microbiological hitch-hikers,” Levin said.

He pointed out that in many laboratory studies, Earth’s microbial species were found to be able to survive the Martian environment. It also has been determined that some bacteria can survive in space for years.

Levin is just hoping that NASA can one day follow up on the life-detection experiment from more than forty years ago.

“Several thousand runs were made, both before and after Viking, with terrestrial soils and microbial cultures, both in the laboratory and in extreme natural environments, he added. “No false positive or false negative result was ever obtained. This strongly supports the reliability of the LR Mars data, even though their interpretation is debated.”