Gamers, Get Ready: LG OLED TVs Are First In Line For New Upgrades 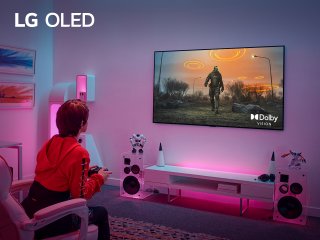 LG Electronics USA announced Tuesday that it has become the first TV manufacturer to offer Dolby Vision HDR at 4K 120Hz, for gaming.

LG has positioned the move as “reaffirming its commitment to providing the best big-screen gaming experience.”

The change will arrive via firmware, called version 03.15.27, and will arrive first on LG’s C1 and G1 OLED TVs. Next, it will arrive on LG’s OLED Z1 series, QNED Mini LED QNED99 series, and NanoCell NANO99 series TVs, and other models from the 2021 lineup, at some point in July.

There had been news reports in recent days about the update, but LG has now announced it officially.

“Once you’ve installed the update (which appears to be rolling out in numerous territories OTA, or can be downloaded for installation from USB drives from the Software & Drivers support section of some territories’ LG websites), heading into the Xbox Series X 4K TV Details screen no longer shows the dreaded red cross appearing against Dolby Vision 4K 120Hz,” Forbes wrote about the new update.

Part of the update will be something called Game Dashboard.

“Available on all 2021 LG TVs equipped with Game Optimizer, Game Dashboard is a floating onscreen menu similar to the head-up display (HUD) found in many games,” LG said. "The feature lets users quickly see the TV's settings and allows them to switch between different genres – Standard, FPS, RPG, or RTS – without pausing the action. The dashboard also shows the status of other modes such as black stabilizer, low latency, and variable refresh rate (VRR) are activated. To access more options, users can launch the Game Optimizer directly from the Game Dashboard.”

“The new Game Dashboard is a simple, at a glance panel you can call up at the bottom of the screen to check which gaming graphics features are in play at any given moment,” Forbes wrote last week about the Game Dashboard feature.

“Touted as one the best TVs for gaming by industry experts and avid gamers worldwide, LG OLED TVs boast features that make games of any genre look incredibly smooth and play fast. With minimal lag, they're able to deliver amazing gameplay with a level of responsiveness that can help users climb to the top of the leaderboards in their favorite next-gen console and PC challenges.”

LG’s C1 was named the top TV at CES back in January.

A new breakthrough, announced in a study from the University of Michigan this week, showed that OLED TVs may soon get much brighter. However, it’s unclear how soon such technology will have applications on TVs and other OLED products hitting the market.