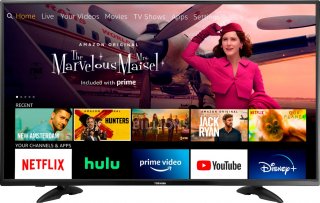 If you thought that LG’s 48-inch CX Series was way out of your budget, know that there is another option currently available that’s also in the 40-inch range but is much more price-friendly.

It’s the 43-inch Toshiba Fire TV Edition 4K TV, which is retailing for $250 (over 20% savings) at Best Buy. Sure, it doesn’t have the same VIP ring to it as an LG OLED or a Samsung QLED model, but this budget set is no slouch—in terms of pure value, it really holds its own.

When compared to the much-vaunted OLED panels, the picture quality of the Fire TV is obviously lacking and won’t necessarily blow you away. Even when put up against lower-tier TCL, Hisense or Vizio panels, it can, at times, struggle to keep up.

Along with a decent 4K display, it boasts a 60-Hz refresh rate and limited HDR capability. But even when watching action-heavy Marvel films, the screen action is fairly smooth and the color gamut is on full display.

For most folks out there, the Fire TV is more than passable for everyday TV-watching and family movie nights—and don’t forget about all the money you saved with this purchase.

What really separates the Fire TV is the clever tie-up it forged with e-commerce giant Amazon. If you’re already a big fan of Amazon Alexa, there’s no reason why you wouldn’t enjoy this set.

There is a mic built into the remote control, and with Alexa handling all communication between you and the TV, it’s like having an Echo or an Echo Dot without actually paying for one. It can also control smart-home devices, get sports scores and weather reports and answer all kinds of questions.

Keep in mind that it is fully capable of giving you access to all of your favorite apps like Netflix, Hulu and Disney+, as well as obviously Amazon Prime Video. Similar to Roku TV, Amazon’s streaming content choices are seemingly endless. But know that TCL’s cheaper Roku TVs lack the handy microphone and voice buttons found on the Amazon Fire TV remote.

For $250, be aware that the Fire TV’s speakers are understandably lackluster, though they could possibly work in smaller bedrooms, dens and kitchens. Any audiophile would probably want to purchase a decent soundbar for a more immersive cinema-like experience.