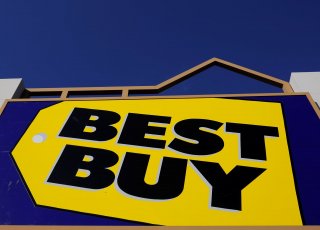 Best Buy on Tuesday became the latest company to announce strong earnings despite the pandemic. The electronics retailer announced that it had set a new record for online sales, while domestic revenue also posted gains.

The company reported that online sales, domestically, had surged 242% over the same quarter in 2019. Enterprise revenue growth rose nearly 4% in the quarter, while domestic revenue of $9.13 billion represented an increase of 3.5% year over year.

The company added that online revenue, in the quarter, made up 53.1% of the company’s domestic revenue, as opposed to just 16.1% in the same period in 2019. International revenue was up for the company as well.

Best Buy said that computing, appliances and tablets—described by the company as “products that help people work, learn, connect and cook at home” —were the biggest growth categories, although softer categories included mobile phones, digital imaging and services.

“Today, we are reporting strong quarterly results in the midst of unprecedented times,” Corie Barry, Best Buy’s CEO, said in the earnings announcement. “We are encouraged to see the customer demand for our products and services and are proud of the amazing execution of our teams. However, we have not lost sight of the fact that people continue to suffer, and we extend our sympathy to all those who have lost someone to this virus, are sick with COVID-19 or are facing financial hardship as a result of the pandemic.”

The company added that it is not offering a guidance for the rest of the year.

“As a result of the ongoing uncertainty, we are not providing financial guidance today,” Matt Bilunas, the company’s CFO, said in the earnings release. “However, I would note that we are planning for Q3 sales to be higher compared to last year but likely will not continue at the current quarter-to-date level of approximately 20% growth. Also, as our stores are fully reopened, we are planning for Q3 SG&A expense to be more in line with last year’s third quarter.”

Best Buy closed most of its U.S. stores in the spring, but resumed some services by the end of April. The company, in June, reopened hundreds of stores and also brought back furloughed employees; this meant that stores were opened for most, but not all of the second quarter.

In mid-July, Best Buy announced that it would require masks for all shoppers in-store.

“Our purpose to enrich lives through technology is more relevant than it has ever been, and we are confident regarding our execution, adaptability and the opportunities ahead,” Barry said in the release.