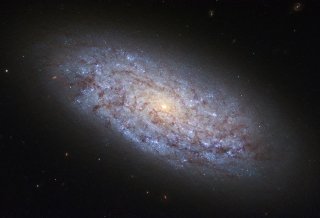 The Hubble Space Telescope has spotted a galaxy—known as NGC 7513—that is speeding away from the Milky Way at nearly 3.5 million mph.

That equates to the mind-boggling speed of roughly 1,000 miles per second. For reference, our planet orbits the sun at 67,108 mph.

However, there won’t be close-up flybys anytime soon—as this fleeing galaxy, found within the Sculptor constellation in the skies over the Southern Hemisphere, is located about sixty million light-years away.

Somewhat similar to our own Milky Way, this galaxy possesses a feathered-spiral and barrel-shaped structure, featuring a central arrangement of stars. The bar-like structure can affect the movement of gas and stars within the galaxy.

This movement away from our galaxy, however, really isn’t at all surprising. Astronomers have long observed other galaxies doing the same as our universe continues to expand.

As this expansion occurs, which hasn’t stopped since the Big Bang, the space between each galaxy stretches.

Edwin Hubble, whom the space telescope is named after, was a pioneering astronomer who revealed to us that our galaxy was one among many. His groundbreaking discovery suggested that we live in a continually expanding universe.

Not all galaxies, though, are moving away from one another—some are confined in a death dance due to immense gravitational forces.

For example, our Milky Way galaxy is on a collision course with the Andromeda galaxy in about 4.5 billion years from now, according to observations made by Europe’s Gaia spacecraft. Astronomers are predicting that these two galaxies will eventually merge together.

Like other large galaxies, both the Milky Way and Andromeda likely had a voracious appetite billions of years ago, gobbling up hundreds or thousands of smaller nearby galaxies.

In only about two billion years, the Milky Way faces another potential threat, as our galaxy will collide with the Large Magellanic Cloud, according to a study published last year in the Monthly Notices of the Royal Astronomical Society.

Next March, the $10 billion James Webb Space Telescope, a joint venture between NASA, the European Space Agency, the Canadian Space Agency and Space Telescope Science Institute, will head into space to become the much-vaunted successor to the highly successful Hubble, which was launched in 1990.