InFocus Debuts Low-Cost Roku HDTVs: How Good Are They? 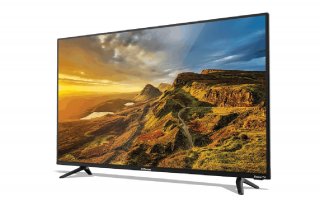 The Roku TV platform has become very possible in recent years, with its easy-to-use smart TV platform mostly associated, at least in the U.S., with TCL and Hisense’s affordable TVs.

Now, a new Roku TV has arrived from an unlikely brand—InFocus.

InFocus announced this week that it has launched a forty-five-inch Full HD Roku TV, which will be available at such retailers as ABC Warehouse, Electronic Express, the revived online incarnation of Circuit City, newegg.com, and other retailers. InFocus had announced Roku TV plans at CES back in January.

ABC Warehouse lists the price of the TV at just $248, which is about on par with the cheapest Roku TVs available from the other brands.

“InFocus Roku TVs provide all the channels you want at a price that won’t break the bank. The unique 45” screen size provides a versatile viewing experience that’s right for just about any size room,” Darren S. Ivey, Director of Sales & Marketing, Lotus International Company for InFocus TVs, said in the announcement.

The product is being directed at cord cutters, as well as others.

“Whether you are cutting the cord with traditional cable TV or just need a place to relax and discover new streaming channels, viewers can take advantage of America’s #1 streaming platform—according to Kantar—with the Roku OS. Combining this with the crispness and depth that viewers expect in a smart TV, InFocus TVs push the envelope in affordable home entertainment,” Ivey also said.

Roku said in a survey this summer that over a third of U.S. households have cut the cord.

Those purchasing the InFocus TVs will have access to all of the channels offered by Roku, which includes the Roku Channel as well as most major streaming services. HBO Max is still not offered on the platform, although Peacock was added to Roku after a deal with Comcast last month.

According to numbers from 2019 by Statista, Roku holds 30 percent of the market in the United States for connected TVs, followed by Samsung (11 percent), Amazon (10 percent), and Google (9 percent), allow the “other” category was 38 percent.

InFocus is a brand name with a long history in the consumer electronics industry, making such products as projectors and large displays. That brand was purchased and taken private in 2009 by Chinese entrepreneur John Hui who has recently been selling smartphones and other tech products in China.

The TV venture appears to be the result of some type of licensing deal with Lotus International Company, a Michigan-based company that is described in the announcement as an “integrated specialty technology firm.”