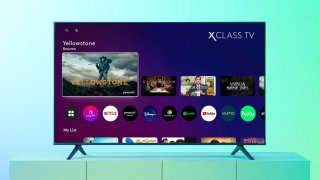 Reports in recent months have stated that Comcast, in collaboration with Walmart and Hisense, was looking to make a TV. Now, that TV project is finally official.

The product, Comcast said in a press release, is called the XClass TV, and Comcast is touting it as “Extending the Company’s Global Technology Platform To Smart TVs Nationwide.”

The TVs will be sold at Walmart and on Walmart.com, and represent Hisense’s first 4K UHD XClass TVs. And in addition to the major streaming apps, the XClass will come with a free 12 months of Peacock Premium.

“XClass TV will offer consumers an affordable and innovative smart TV with an integrated interface and voice remote to access their favorite live and on demand streaming content from hundreds of apps and services,” the press release said. It added that the first TVs will be available this week, confirming a report earlier this week by the tech news site Protocol.

“XClass TV is built on the same global technology platform that powers the company’s entertainment and connectivity products and services, including Xfinity X1, Xfinity Flex, Sky Glass and Sky Q. The platform’s technology uniquely integrates streaming, on demand, broadcast, and cable options in one place under unified voice search, discovery, apps and interactive features. It offers customers intuitive navigation across thousands of apps, movies, shows, and sports with a simple voice command or remote click,” the company said.

The XClass line continues Comcast’s diversification efforts, in a time when its core business, the traditional cable bundle, is declining.

“We’re thrilled to bring our award-winning entertainment experience to smart TVs nationwide and for the first time offer consumers inside and outside our service areas a simple way to navigate their live and on demand content, whether streaming or cable,” Sam Schwartz, Chief Business Development Officer at Comcast, said in the announcement.  “Hisense XClass TVs are the next products in a growing portfolio built on our flexible and scalable technology platform, bringing the best innovative products - whether that’s a streaming box or a smart TV—to each territory and customer segment.”

Hisense also touted the new TVs in the release.

“As a rapidly growing brand in the U.S., Hisense is committed not only to quality products but also to providing an array of options for our customers,” David Gold, President of Hisense USA, said in the announcement. “We’re excited to partner with Comcast to bring the first XClass TVs to market in the U.S.”

Comcast will announce its latest quarterly earnings on October 28. In the second quarter, Comcast lost slightly less than 400,000 subscribers, although it remains the cable company with the most subscribers with 18.9 million.