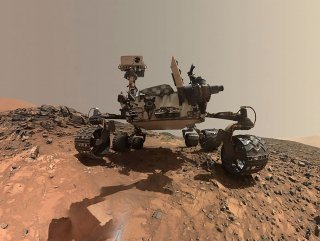 A new study claims that humanity would need to send a minimum of 110 people to Mars to build a self-sustaining civilization there.

The paper, written by Jean-Marc Salotti from France’s Bordeaux Institut National Polytechnique and published in Scientific Reports, took a big swing in trying to solve this seemingly simple question via mathematical modeling.

“For survival on Mars, some assumptions are made for the organization of the settlers and engineering issue,” Salotti wrote in the study.

“The minimum number of settlers has been calculated and the result is 110 individuals.”

Salotti concedes the figure is a “relatively low number,” but it would help to make sure that supplies and resources don’t run out quickly. He imagines these individuals living in an oxygen-filled dome and growing plants in greenhouses constructed of glass with reflectors that provide “sufficient light.”

In order to have “appropriate soil” for plants, Salotti believes an assortment of rocks, salts, water and “organic wastes and decomposers (insects and microorganisms)” is needed.

“Water will be extracted from icy terrain and recycled using natural filters,” he added.

Salotti noted that the overall success of those people on the Red Planet would likely depend on an array of factors, including how well they cooperate with one another and share their time and resources.

Problems arising from armed conflicts and government control here on Earth, however, could be major roadblocks for the future colonization of Mars.

“In case of war on Earth, important space sector infrastructures may be destroyed, causing a long-term interruption in space travel,” Salotti said.

“It could also happen that a conflict occurs between the terrestrial governments and the settlers and, later on, a group declares independence and tries to survive on its own. Another reason could be the will of a new government to stop the settlement process because of the never-ending increasing cost.”

Although the question the study tackled is largely theoretical at the moment, Salotti is aware that life on Earth could one day be threatened by “some cataclysmic event”—and the only way humanity could survive would be to head to Mars or another suitable planet.

Earlier this month, SpaceX CEO Elon Musk urged his employees to accelerate the work on the next-generation Starship rocket, which will one day transport humans to Mars and eventually build a colony there.