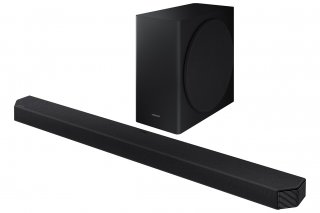 Korea’s two dominant tech companies, LG and Samsung, each released their new soundbars as they aim to expand their presence in the highly competitive home-audio market.

Samsung, the world’s biggest TV maker, announced the global launch of its two new premium soundbars—the HW-Q950T and the HW-Q900T—which settle in to complete the company’s full 2020 Q-Series soundbar lineup.

These new soundbars will begin retailing in major markets in stages—starting with Australia. Both products will be available to purchase in South Korea beginning next week, with the HW-Q950T priced at 1.9 million won ($1,590) and the HW-Q900T at 1.4 million won ($1,170).

Both of Samsung’s models will support the much-coveted Dolby Atmos and DTS:X audio technologies. They also include eARC support to produce richer and fuller sounds that will add to any cinema-like experience.

Improvements have also been made to the design, as Samsung has decided to reduce the height of both models, so that they fit perfectly with its 2020 QLED TV offerings.

“In collaboration with Audio Lab in the U.S., we have been able to develop multi-dimensional surround sound that can be more accessible at home, which was previously only possible with a separate home-theater system,” Seong Cho, senior vice president and head of global product marketing of the Visual Display Business at Samsung Electronics, said in a news release.

“In addition to improving sound quality, we also focused on fine-tuning the soundbar’s design aesthetic by using eco-friendly textiles, made by Danish premium brand Kvadrat.”

Meanwhile, LG Electronics introduced the GX soundbar, which visually will be a perfect complement to the company’s GX Gallery lineup of OLED TVs. Priced at $1,299, the GX delivers superior sound thanks to Dolby Atmos and DTS:X capability, giving users a remarkable three-dimensional audio experience.

The speaker is Dolby Vision compatible via 4K pass-through, and the included subwoofer connects wirelessly to the soundbar to deliver thumping bass from anywhere in the room. Not to be outdone, the GX is Hi-Res Audio certified and boasts easy connectivity options, including eARC and Bluetooth.

The GX soundbar will start rolling out this month in Europe, North America, Asia and other key markets, LG said in a release.