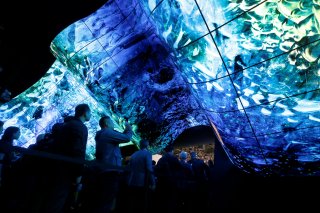 Mid-or-larger size OLED panels are mostly associated with TVs, but there have been indications of late that we’re going to be seeing them in more and more surprising places before long.

There was a report last week that the Japanese consortium JOLED was working with AERQ to put OLED screens on airplanes, including on the backs of seats, something at which LG had hinted in its CES presentations last year.

Now, LG is planning to put OLED panels somewhere else: On automatic doors.

LG Electronics announced this week that it has reached a memorandum of understanding with ASSA ABLOY Entrance Systems, a Swedish film described as “global leader of automated pedestrian, industrial and residential doors and service,” to develop transparent OLED automatic doors.

The official unveiling of the product will take place this week, though it’s unclear when the product might arrive on the market.

“Our previous large-size transparent OLED displays, which can be found around the globe, proved that transparent OLEDs were a very effective medium and we’re now taking that to a whole new level.”

“I am really proud that we, together with LG, can offer our customers this ground-breaking product with the new transparent OLED automatic sliding door. It will put our customers in the forefront providing them with a fantastic new solution when it comes to customizing brand and customer experiences,” Christopher Norbye, executive vice president and head of Entrance Systems Division at ASSA ABLOY, said as part of the announcement.

On the TV side, LG was the second-highest-selling TV brand in the world in the third quarter of 2020. Of the record 62 million TVs that were sold worldwide, according to Trendforce, LG sold 7.9 million. That’s second behind Samsung, but ahead of TCL, Hisense and Xiaomi, and LG had posted growth from the same quarter the year before.

In second-quarter rankings of sales of “advanced TVs” in North America, also from Trendforce,  LG was also second, behind Samsung and ahead of Vizio.

“If market demand for TVs remains high throughout the quarter, TV brands will likely continue their efforts to reach their yearly shipment targets while simultaneously expanding their market shares,” that report said.