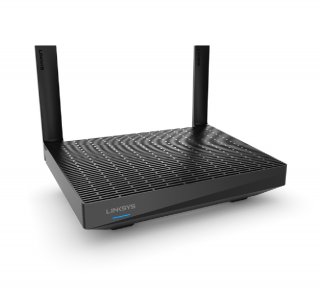 Router manufacturer Linksys announced this week the arrival of the MAX-STREAM AX1800 Mesh Wi-Fi 6 Router (MR7350), a low-cost Wi-Fi 6 router. The product arrives at a lower price point, $150, than most Wi-Fi 6 routers.

The product is up to the Wi-Fi 6 standard and, according to the company, offers speeds of up to 1.8 Gbps and coverage of up to 1,700 square feet (Per Engadget, the company's flagship MR9600 offers 6Gbps and 3,000 square feet of coverage.)

Linksys also touts the product's "hassle-free setup," and that it's compatible with any Linksys mesh product.

"At Linksys, we believe that WiFi is the foundation of the modern home,"  Kannan Vardarajan, director of product management at Linksys, said as part of the announcement.

"We are witnessing a shift in home productivity as more consumers rely on their home network for remote work, virtual healthcare and entertainment, and we're proud to be offering an affordable, innovative, future-ready solution with the MAX-STREAM AX1800 Mesh WiFi 6 Router (MR7350) for consumers to enjoy today and for years to come."

Wi-Fi 6 debuted in 2019, succeeding Wi-Fi 5, and has been rolling out in router devices this year. Wi-Fi 6 is touted as providing better coverage in large public places, such as stadiums and offices.

Meanwhile, the next step up from Wi-Fi 6, Wi-Fi 6E, is on the way. The FCC voted in April to make 1,200 Megahertz of spectrum available for unlicensed use, with Wi-Fi among those uses. That spectrum will be opened later this year.

“Wi-Fi 6 will be over two-and-a-half times faster than the current standard and will offer better performance for American consumers," the FCC said at the time. "Opening the 6 GHz band for unlicensed use will also increase the amount of spectrum available for Wi-Fi by nearly a factor of five and help improve rural connectivity.”

In April, we ranked the best and worst of the Wi-Fi 6 routers which were available at the time.

The new Linksys router can be purchased direct from Linksys, from Best Buy and other retailers.