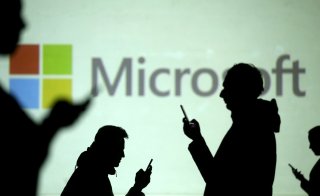 Microsoft, in its third-quarter earnings release on Tuesday afternoon, posted revenue of $37.2 billion, a 12 percent increase over the same period the year before. That number was ahead of analyst expectations of $35.76 billion, per MarketWatch.

“The next decade of economic performance for every business will be defined by the speed of their digital transformation,” Satya Nadella, chief executive officer of Microsoft, said in the earnings release. “We are innovating across our full modern tech stack to help our customers in every industry improve time to value, increase agility, and reduce costs.”

The successful quarter, the company said, was largely about the cloud.

“Demand for our cloud offerings drove a strong start to the fiscal year with our commercial cloud revenue-generating $15.2 billion, up 31 percent year over year,” Amy Hood, the executive vice president and chief financial officer of Microsoft, said. “We continue to invest against the significant opportunity ahead of us to drive long-term growth.”

In addition, the company reported that Xbox content and services revenue had jumped 30 percent, while Surface revenue rose 37 percent, as the company announced new Surface devices in August. Office commercial products and cloud service revenue posted a 9 percent increase in the quarter, driven by 21 percent revenue growth for the Office 365 Commercial product.

Microsoft, throughout the summer and early fall, was rumored to be purchasing the controversial social media app TikTok, although the deal, which is still not final, ended up with Oracle and Walmart hosting TikTok’s U.S. operations.

Seeking Alpha called Microsoft’s results “perhaps its most impressive quarter of the past five years.”

Analyst Daniel Ives, of Wedbush, said of the results that “we believe the strong numbers from Nadella & Co. is a broader indication of strength we expect to see across the enterprise cloud software landscape throughout 3Q earnings season . . . In a nutshell, Nadella & Co. continue to lead a transformational cloud story narrowing the gap vs. Bezos and AWS into 2021, which combined will also have a major ripple impact for well-positioned cybersecurity names protecting this cloud secular shift.”

However, according to MarketWatch, Microsoft’s forecast for the next quarter underwhelmed. The company projected revenue of $39.5 billion to $40.4 billion, compared to an average estimate of $40.5 billion, the site said. The next quarter is the first when Microsoft’s next-generation gaming console, the Xbox Series X, which is set to arrive in November. That miss led the company’s stock to fall in after-hours trading, per CNBC.

In the pandemic, sales of video games and other video game accessories, reached over $10 billion overall in the second quarter, setting a new record.