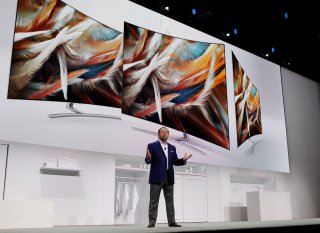 Samsung on Thursday posted quarterly earnings, posting a profit of KRW 8.15 trillion (about $6.84 billion) on income of KRW 52.97 trillion.

Samsung, the company said, “responded to challenges through its extensive global supply chain, while minimizing the impact of the pandemic by strengthening online sales channels and optimizing costs.” The higher earnings were also attributed to a partial recovery in global demand, which “helped offset some COVID-19 effects.”

The company’s consumer electronics division “posted higher earnings over growing sales of appliances such as air conditioners and dryers, as well as premium TVs including QLED models.” The company also confirmed that it will accelerate development of quantum-dot (QD) displays as planned,” and intends to accelerate the profits in its consumer electronics division “through sales of premium products, including QLED TVs and the Bespoke home appliance series, and more efficient marketing.”

On the phone side, the world’s largest smartphone maker said that it expects 5G usage to increase, with growth also expected for “high-resolution and triple/quad camera for mobile devices.” The company also expects smartphone sales to rise next quarter, with the arrival of new models.

“The Company will aim to increase profitability going forward through premium product sales and more efficient marketing,” Samsung said in the earnings release.

Samsung in early August will hold an “Unpacked” event, where it is expected to unveil several major new devices, including the Galaxy Note 20, and likely also a new Galaxy Fold, the Galaxy Tab S7, the Galaxy Watch 3 and Galaxy Buds Live.

A report this week stated that Samsung is in talks with Google to give Google Assistant a more prominent spot in Samsung smartphones, likely at the expense of Samsung’s much-derided proprietary virtual assistant, Bixby.