New Sonos Arc: The Expert Reviews Are In...(There Are Issues) 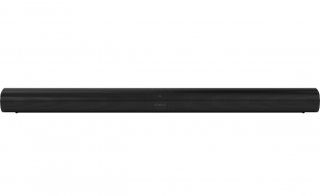 Back in May, Sonos announced that it was selling a new soundbar, called the Arc. Retailing at $799, it represented Sonos' first product to be equipped with Dolby Atmos support.

The first reviews of the new product arrived earlier this month, with The Verge, Gizmodo and other outlets praising the soundbar's quality, while noting that it would only work with newer TVs.

Now, more reviews of the Arc have appeared.

RTINGS.com, in a review published Monday, gave the Sonos Arc a score of 6.5, calling it "a decent overall soundbar." It listed pros that included its "sleek and very well-built design," an upgradeable setup and the Room Correction feature. Cons included "lack of bass" and "poor performance at max volume."

"It's quite a versatile bar, though there seem to be some issues with the bass range and it performs quite poorly at max volume," the review said. "Overall, the soundbar sounds a bit bright, even after using the room correction feature. On the upside, it's a very well-built bar that has a sleek design and it features built-in Google Assistant and Alexa."

The reviewer went on to note that a new firmware update has been released, following the completion of their evaluation.

In RTINGS' rankings of the best Dolby Atmos soundbars, published last month, it listed the Samsung HW-Q90R as the best one, with a mixed-usage score of 8.2, compared with 6.5 for the Arc. That soundbar, however, is more expensive, with a listed price of around $1,000.

TechRadar, in a review published last week, gave the Sonos Arc five stars, and described it as "bending the rules of surround sound." It praises the Dolby Atmos use, what it called a "discrete all-in-one soundbar" and the surround sound, while cautioning that the product "Doesn’t suit every room," and that the Trueplay Tuning feature is iOS-only.

"The Arc from Sonos is a streamlined soundbar that offers a premium surround sound experience without the need for supplementary speakers," the review said. "If you want a minimalist surround sound package and you have a squarish home cinema room then the Sonos Arc is an excellent all-in-one surround sound system."

Metro, in the U.K., also recently reviewed the Sonos Arc, calling it "a big, bold gadget taking over flagship duties from the seven-year-old Playbar."

"The Arc hasn’t become Sonos’ most expensive product for any old reason but £800 is still on the affordable side when you look around at the other Atmos-enabled soundbars out there," the review said. "The sound is terrific and it fits in simply and reliably with other Sonos speakers you may have around the house."