NFL’s Pro Bowl Will Be ‘Played’ in Madden 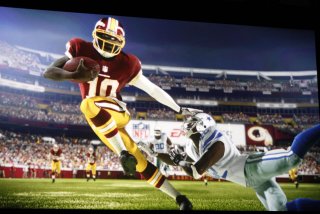 No matter how popular or important the NFL has gotten over the years, it hasn’t been able to quite figure out the Pro Bowl, and how to make it exciting. The game, which is the NFL’s version of an all-star game, is traditionally played the week after the Super Bowl, although in recent years it’s sometimes been played on the off-week prior to the Super Bowl. Doing the latter has forced players on the Super Bowl teams to skip the Pro Bowl, while in many years a large number of star players have opted to skip the exhibition game altogether.

In this year of coronavirus, the NFL had announced in October that this year’s Pro Bowl—which had been scheduled to be played at Allegient Stadium in Las Vegas—would not take place. However, the NFL announced yesterday that the Pro Bowl will happen virtually, inside the long-running “Madden NFL” video game.

The NFL and EA Sports, the company that produces “Madden NFL” and has the exclusive rights to use real NFL players, logos and stadiums in a video game, announced Tuesday that they will “create a week-long series of matchups featuring celebrities, NFL Legends, current players, and streamers playing as the official Pro Bowl rosters in Madden NFL 21,” according to the NFL’s official announcement. The “game” will be available to watch across a variety of platforms.

“Even amidst unparalleled change across the sports industry, we are excited to transition many of the signature components of the Pro Bowl—which will go virtual in Madden NFL 21—into a new innovative experience for our players and fans. We remain committed to using our Pro Bowl platform to empower fans to virtually celebrate the best players in the game,” Peter O'Reilly, NFL EVP of Club Business and Events, said in the announcement.

“Our partners at EA SPORTS and Verizon are uniquely positioned to help the NFL make the transformation of this high-profile event from live to virtual possible, and we look forward to working closely with them to deliver this unprecedented experience to fans.”

The “Madden NFL” game is named for former NFL coach and announcer John Madden, who was long featured in the game prior to his retirement.

This year’s version of the game drew some not-so-positive reviews, which led to a hashtag campaign asking the NFL to #EndMaddenMonopoly, and allow other video game companies to make NFL games. However, EA’s exclusivity agreement with the NFL and its players’ association has been in place since 2004, and is believed in run through 2025.

Another NFL exclusivity agreement, with DirecTV for its “Sunday Ticket” package, is reportedly set to run out sooner, after the 2022 season.