OLED Burn-In On HDTVs Is a Problem. What About Your Smartphone? 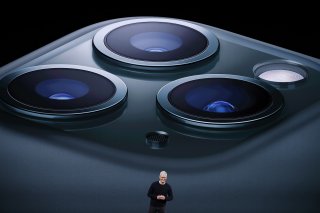 You’ve probably heard about the “burn-in” problem on some OLED TVs. This happens when a visible mark is left on screen, as a result of a channel logo or sports scoreboard appearing there for an unusual length of time.

Burn-in used to happen with old CRT TVs, and it’s most pronounced these days with OLED models. Samsung, which uses the different QLED technology in its TVs, has even run “negative ads” against its OLED-based rivals. However, the name is something of a misnomer since it doesn’t involve any actual burning.

Some experts have advised that burn-in doesn’t happen anywhere close to all the time, nor is it always permanent. TV owners who change the channel and turn off their sets regularly can usually avoid the problem. Meanwhile, some manufacturers, such as LG, have taken steps to alleviate the issue.

These days, OLED screens are also often found on smartphones as well, including some of the highest-end ones. Can burn-in happen on those devices too? Yes it can. And manufacturers have also taken steps to combat the problem.

Apple, on its support page, says that the Super Retina and Super Retina XDR displays on iPhones have been engineered as “the best in the industry in reducing the effects of OLED ‘burn-in.’” iPhones, Apple says, utilize “special algorithms that monitor the usage of individual pixels to produce display calibration data. Your iPhone uses that data to automatically adjust the brightness levels for each pixel as needed to reduce visual effects from ‘burn-in’ and to maintain a consistent viewing experience.”

Samsung, those commercials touting its TV notwithstanding, has dealt with burn-in concerns on past Galaxy devices, including the S7 and S8. More recently, there have been reported burn-in issues with the new OnePlus 8 smartphone, per Pocketnow.

In terms of dealing with burn-in on an overall basis, whether for Apple or Android devices, Digital Trends advises that users turn their device off and then on. After that, customers should utilize a special app such as ScreenBurnFixer, or manually change certain settings related to brightness settings and lock screen.