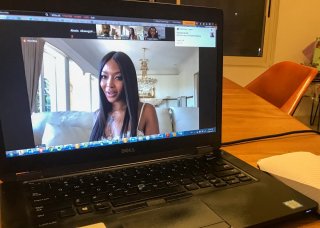 Logitech is a relatively well-known manufacturer of keyboards, webcams and other computer accessories. And as a company, they’ve been a notable beneficiary of the coronavirus pandemic.

We already knew back in April that standalone webcams, long thought to be a technology of the distant past, were experiencing a renaissance in the age of working from home and Zoom calls that there were even indications of a shortage. Logitech soon became a mainstay of “best webcam to buy while working from home” lists.

And now, it is obvious that Logitech did huge business in the most recent quarter.

Logitech, in earnings this week, stated that it posted sales of $1.26 billion in the fiscal second quarter, a 75 percent gain over the same period in 2019. The sales represented a record for Logitech and the first quarter in which it had ever beaten $1 billion in sales.

Speaking of all-time highs, Logitech’s stock hit that milestone Tuesday and has now doubled in value since the start of 2020, per Motley Fool.

The company also posted net income of $266.9 million, compared to $73 million the year before. And the gains were across the company’s business segments, per Zacks Equity Research. The company posted an 85 percent year-over-year gain in its gaming segment, while video collaboration jumped 164 percent. Its audio and wearables saw a 68 percent jump. And PC webcams saw a gain of 256 percent, to over $100 million. The only segments to show losses were mobile speakers, smart homes, and “other.”

“Our growth and profitability accelerated again this quarter, and we are raising our annual outlook,” Bracken Darrell, the president and chief executive officer of Logitech, said as part of the earnings release.

“The growth trends that drive our business have accelerated as society adjusts to its new reality. The organization leaders I speak to envision people increasingly working from multiple locations, a hybrid work culture that is emerging as the norm. And at home, the rise of gaming as a spectator and participant sport continues with no end in sight. Our products are essential to helping customers work, play and create wherever they are. Logitech is well-positioned for long-term growth.”

Motley Fool did note, however, that Logitech’s hot streak is unlikely to continue forever.

“Investors should remember these consumer discretionary sales are being driven by temporary external circumstances. One shouldn't expect the coronavirus pandemic to last forever or for consumers to continue buying shelter-at-home products, as they have this year. It creates a bumper year for Logitech, and that's great. But in time, I expect sales to revert to more normalized growth.”