Peloton Posted Over $1 Billion in Revenue, Says It Will Up Supply Chain Investment 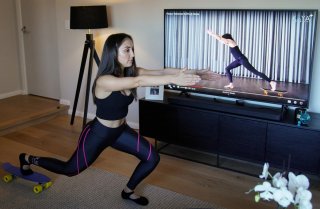 Peloton, the fitness bike company, was one of the clear winners of the pandemic, with people stuck at home spending a lot of time and money on the company’s products. That momentum continued in the most recent quarter, as the company posted revenue of over $1 billion, as revenue jumped 128 percent. Per CNBC, the company’s performance beat analyst predictions.

Clearly, Peloton expects to keep that up, raising its outlook to state it expects $4 billion in revenue for the full year. The company, in the quarter, posted a profit of $424.8 million.

In addition, the company saw Connected Fitness Subscription Workouts jump more than 300 percent. In addition, each subscription averaged 21.1 Monthly Workouts, compared with 12.6 in the same quarter the year before.

While Peloton’s stock dropped slightly early on Friday, it had surged significantly throughout the last year. It was trading at $27.86 a share a year ago and rose throughout 2020, hitting $100 in September. After a dip in November, Peloton’s stock hit a high of $162 in late December and was trading at $145.37 as of Friday morning. The company’s current market cap is about $47.75 billion.

“We continued to see robust demand for our connected fitness platform through the Holiday selling season, and Member engagement gains continue to validate our hardware, software, and content investments,” the company said in its shareholder letter.

While the company said it still has some “challenges” with wait times, it has announced some steps to rectify that problem.

"The ongoing COVID-19 pandemic continues to present a challenging operating landscape, and we continue to work to address long order-to-delivery timeframes. However, our supply chain investments over the last several months are helping us better match our supply and demand going forward,” the company added. “Our manufacturing output has significantly increased.”

Highlights of the quarter included the arrival of the Peloton Pilates program, seasonally-themed content that was rolled out over the holidays, and artist-themed classes from the likes of Beyonce, The Beatles, Elvis Presley and Outkast.

Peloton had also posted a profit, while acknowledging a continued supply crunch, at the end of the previous quarter, which had seen the arrival of the new Bike+ product and Peloton Tread

The company, back in October, announced a crackdown on hashtags associated with the QAnon conspiracy theory. The month before that, a company called Echelon had announced a Peloton competitor that it implied was branded by Amazon, and represented a move by Amazon into that space. However, Amazon later disclaimed knowledge of the product, which was taken down from the e-commerce site.