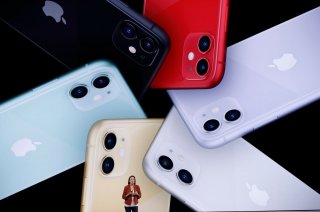 OLED panels may be a more vital component of both smartphones and TVs than ever before, but thanks to the pandemic, it looks like the market will actually get smaller this year.

According to a report this week by Omdia, formerly known as IHS Markit, as cited by OLED.info, the global market for OLED panels is expected to contract by 1.2 percent in 2020, to 465 million panels. This is thanks to demand falling for high-end smartphones.

The OLED market refers to all OLED panels, including TV and smartphone panels.

Earlier this spring, according to OLED-info, Omdia had revised down its global TV outlook to 3.5 million panels shipped, down from a previous estimate of 4.5 million. The firm did, as of April, predict that the market for the TV panels would grow to 6.7 million in 2021 and 11.5 million in 2023.

In keeping with the theme of lower demand, Apple reportedly agreed to pay Samsung, its primary iPhone screen supplier, a penalty of $950 million, after Apple purchased fewer panels than required per the companies’ agreement.

Apple will reportedly use OLED panels for all four of the iPhone models that it’s releasing this year, and is said to be using Samsung for the majority of them, with LG Display also on board for one of the models, and possibly BOE for one as well, although that supplier is reportedly out of the initial run.

Meanwhile, LG is said to be working on a rollable OLED screen smartphone that’s set for release in 2021. TCL has already shown a prototype for such a device, using a BOE screen, and it will actually hit the market next year, the company’s CEO said last month. LG first rolled out rollable OLED TVs, which it first showed at CES in 2019.

IHS Markit predicted earlier this spring that 100,000 rollable OLED displays (of all sizes and applications) would ship in 2022, a number that’s expected to rise to 1.3 million four years later, although even that would represent only a small niche of the overall OLED market.