QLEDs For Everyone: Samsung Is an HDTV Superpower 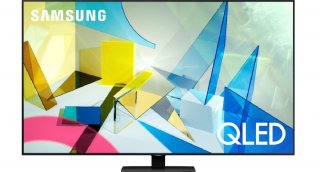 According to the DSCC’s Quarterly Advanced TV Shipment and Forecast Report, bigger TVs performed very well in the most recent quarter.

“While in 2020, we observed that the smaller screen sizes of Advanced TVs recorded the biggest gains, in the first quarter of 2021 it was all about the biggest sizes,” DSCC said. “Advanced LCD TVs of 75” increased 158 percent year over year to 336K, and Advanced LCD TVs larger than 75” increased 103% to 123K, while OLED TVs 77” and larger increased by 430% to 85K, more than the total cumulative volume of this category for all years up to the end of 2019.”

And some of that came from larger screens. While revenues for advanced LCD TVs rose by 105 percent and those bigger than 75 inches rose 106 percent, the OLED category, 77 inches and higher, surged by 358 percent as, per DSCC, “the sales volume increased dramatically with only modest price declines.”

As for brands, Samsung led the industry, while LG posted gains.

As for regions, North America and Western Europe remain the largest markets for advanced TV, holding sixty-four percent of the market for the technology. In North America, Samsung leads the market.

“In North America, Samsung enjoys a dominant position on the strength of its large-screen product portfolio but has seen its share erode as competitors in both Advanced LCD and OLED TV grow share,” DSCC said. “LG increased Advanced TV shipments to North America by 156 percent Y/Y to increase its unit share to 20 percent and its revenue share to 27 percent. TCL continued to gain as a growing force in the Advanced TV market in North America, rising from 4 percent share in Q1 2020 to 12 percent unit share in Q1 2021, passing Vizio for the #3 spot in units. Perhaps even more impressive, TCL passed Sony for the #3 spot in NA revenue at 13% on the strength of sales of MiniLED TVs.”