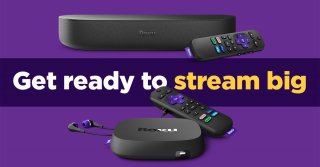 Roku made a variety of announcements Monday about new products that it has on the way.

Directed at "cord cutters and people who love to stream," the new Roku Ultra is the company’s new flagship streaming player, which will offer support of both Dolby Vision and Dolby Atmos, the company said in a blog post. It will cost around $100.

“The new and improved Roku Ultra offers powerful, smooth streaming with channels that launch in a snap and our best wireless, now with up to 50% more range and Bluetooth support,” the company said in the post. “Stream in extraordinary Dolby Vision® picture quality and experience immersive Dolby Atmos® sound when you pair it with compatible devices.”

The company also announced the new Roku Streambar, which offers what Roku calls “4K HDR picture quality on 4K HDR compatible TVs.” It can be controlled by Amazon Alexa and  Google Assistant, with Apple AirPlay 2 and HomeKit capabilities on the way as well.

That AirPlay 2 capability is important for a key reason, as pointed out by Variety: It will provide a workaround to allow users to watch HBO Max on Roku devices via AirPlay. Roku and HBO parent company AT&T have still not reached a deal to allow the HBO Max app on Roku devices, although Roku did reach such a deal with Peacock earlier this month. Roku TV users, in addition, can use Chromecast to get HBO Max on their TVs.

The capability won’t arrive for a while, and it’s always possible that Roku and HBO could have a deal by then.

Both the Roku Ultra and Roku Streambar will ship in October.

Roku also announced the arrival of the new Roku OS 9.4, which will support AirPlay 2 and HomeKit.

"The Roku OS allows consumers to easily get to the content they want to watch so they can sit back and enjoy the show,”  Ilya Asnis, senior vice president of Roku OS at Roku, said in the announcement Monday. “With Roku OS 9.4, we give our customers even more choice and new ways to navigate and control content-rich experiences on and off Roku devices.”

In addition, the company announced that its Roku Channel will now be available as a standalone app, on iOS and Android. The channel, which offers free streaming movies and TV, as well as live TV channels, had previously only been available on Roku devices.

In addition, TCL has made available a new line of “Roku TV-ready” low-cost Alto soundbars, which are meant to work with TCL’s Roku-branded TVs. The top of the line is the Alto 9 Plus, which offers Dolby Atmos functionality, which is available now for $299.

The Roku TV Ready was announced by Roku back in January, with TCL and Sound United - the parent company of such audio brands as Denon, Polk Audio, Marantz, Definitive Technology and Classé- the first brands to sign on.