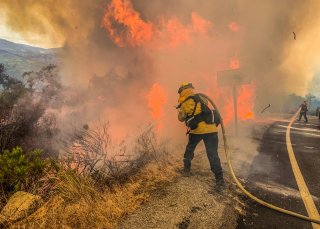 A task force for a federal financial markets regulator has sounded the alarm in a new report that asserts climate change may spawn “serious emerging risks to the U.S. financial system.”

“Climate change poses a major risk to the stability of the U.S. financial system and to its ability to sustain the American economy,” the U.S. Commodity Futures Trading Commission’s (CFTC) climate subcommittee wrote.

The report is calling on Congress to quickly impose a “fair, economy-wide, and effective” price on carbon and push financial regulators to “more urgently” work to figure out the best ways to limit economic damage from climate change.

“Financial markets today are not pricing climate risk. The financial markets cannot do that on their own. Until this fundamental flaw is fixed, capital will flow in the wrong direction,” Bob Litterman, chairman of the CFTC climate subcommittee, said in the report.

“Only then will the awesome power of the financial system be able to address at scale this existential threat.”

Many scientists worldwide have already pinpointed climate change as the chief culprit for destructive weather events that include more powerful hurricanes, wildfires and severe floods.

According to the report, such weather patterns will only generate “financial system stress” that could devastate the economy on all levels.

“Over time, if significant action is not taken to check rising global average temperatures, climate change impacts could impair the productive capacity of the economy and undermine its ability to generate employment, income, and opportunity,” the report reads, also suggesting that the climate crisis could eventually turn into a full-fledged financial crisis.

Environmental groups that were involved in the report emphasized the need for urgent action now.

“For such a politically and sectorally diverse group to issue such a strong call for regulatory action is testament to just how serious a systemic financial threat climate change poses to U.S. capital markets, and how concerned stakeholders from across the political spectrum are about it,” Mindy Lubber, CEO of the sustainability nonprofit Ceres, said in a statement.

Other reports have also warned of economic consequences from climate change. In December, the Principles for Responsible Investment noted that rising temperatures, along with the policies put forth to fight it, have the potential to wipe out $2.3 trillion of value in global stock markets.