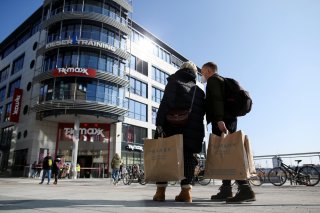 U.S. economic news has been mixed in recent months. What has appeared to be strong fundamentals have been undercut repeatedly by concerns related to the Delta variant. For instance, retail sales had jumped in June before returning back to earth in July.

However, this week the government’s Department of Commerce released figures showing that retail sales were stronger in August than analysts had predicted.

Retail sales in the United States rose 0.7 percent in August, compared to the projected number of a loss of 0.8 percent, according to CNBC.

The increase in sales in August was “likely boosted by back-to-school shopping and child tax credit payments from the government, which could temper expectations for a sharp slowdown in economic growth in the third quarter,” according to Reuters.

At the same time, July figures were adjusted downward. The August figures were up 15.1 percent year-over-year, as sales were very low last year during the heights of the pandemic.

“U.S. consumption is not slowing as quickly as it appeared a month ago despite the fading stimulus, and the Delta variant did not much affect the industries feeding into retail sales,” said Chris Low, chief economist at FHN Financial in New York, told Reuters about the retail sales performance. "The economy continued to hum in August.”

"There is no evidence here that the surge in COVID cases related to the Delta variant is forcing a retrenchment in the economy," Conrad DeQuadros, senior economic advisor at Brean Capital in New York, told Reuters.

The trade group the National Retail Federation, meanwhile, commented on the retail performance. The group also released its own number, which had retail sales up “2.3 percent seasonally adjusted from July and up 12 percent unadjusted year-over-year.”

“The increase in August retail sales reflects the continued strength of the American consumer and the resilience of our nation’s retailers,” NRF President and CEO Matthew Shay said in the NRF’s statement.

“In spite of the ongoing challenges of the global pandemic, concerns about the delta variant, and supply chain and workforce constraints, the retail industry continues to do what it does best—serve customers and support communities while keeping team members and associates safe and healthy,” Shay said. “We maintain our confidence in the historic strength of consumers and fully expect a record year for retail sales and a strong holiday season for retailers.”

At the same time, the Labor Department announced that initial claims for state unemployment benefits rose 20,000 to 332,000, for the first week of September.