The Reviews Are In: Samsung’s QN90A Called the “King of QLEDs” 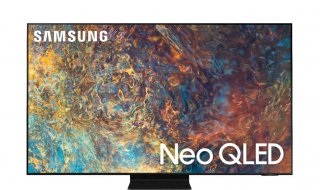 At CES in January, Samsung unveiled its Neo QLED line of TVs, and now the reviews have begun to trickle out of the new model.

Tom’s Guide, in a review published over the weekend, called the QN90A model “the king of QLEDs.”

“The Samsung QN90A Neo QLED TV’s mini-LED backlighting makes for unmatched picture brightness, while a bounty of smart features and a new eco-friendly remote complete the premium experience. With a breathtaking one-inch-thin design, it’s also one of the best-looking sets you can buy,” the review said.

Tom’s Guide listed the positives as its design, its anti-glare abilities, its rechargeable remote, and that “Neo QLED delivers incredible brightness.” The listed negatives included “visible blooming at times,” a lack of Dolby Vision support, and just one HDMI 2.1 port.

“With a proprietary mini-LED panel called Neo QLED, the QN90A promises superior performance to both its established OLED competitors and the evermore convincing mid-range QLED makers. And even though the QN90A Neo QLED is the most premium of all the 4K 2021 Samsung TVs, it’s actually less expensive than its standout Q90T predecessor,” the review said.

In a Techradar review of the QN90A, published in May, the TV was given a rating of four stars out of five.

That review listed such positives as “extreme brightness,” color saturation, upscaling, and the eco-friendly remote. Cons include that the pedestal stand was “wobbly,” mediocre sound quality, and a lack of a OneConnect Box or DolbyVision support.

“As one of Samsung’s first Neo QLED TVs, the Samsung QN90A is thinner, brighter, and bolder than before, offering a high peak brightness and fantastic contrast,” that review said. “Its thinner body comes with a few caveats in the form of thinner sound and a higher center of gravity, and it only sports one full spec HDMI 2.1 port. Its fantastic picture quality makes it an appealing choice, but some minor issues prevent it from being one of the best TVs this year.”

And a CNET review published in late May also praised the QN90A, calling it “closer than ever to OLED.”

“OLED TVs still have the best picture quality I've ever tested, but Samsung's QN90A comes closer than ever,” the CNET review said. "This QLED TV packs a punch brighter than any OLED television while managing to maintain contrast and black level to a degree I've never seen on any non-OLED before. If you crave that brightness, or you watch in a bright room where ambient light is a big issue, you should definitely consider this TV over a comparable OLED.”