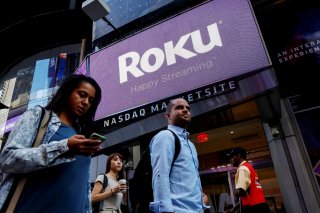 For much of the year, those who observe entertainment have been waiting for Roku to reach a deal with AT&T and Warner Media to make HBO Max available on the Roku platform. For weeks, it was rumored that an agreement was imminent. On Wednesday, the word finally came that a deal had been agreed to, in time for the HBO Max debut of Wonder Woman 1984 on Christmas Day.

On Thursday morning, the HBO Max app became available on Roku. And it was also a happy day for those who own Roku’s stock.

The stock dipped in early March but surged over the next few months, as it became clear that the pandemic was leading to a lot more streaming and a great deal more engagement by users with Roku’s platform. Roku’s shares went over $200 in September and broke the $300 mark around Thanksgiving.

Meanwhile, per Marketwatch, analyst Daniel Kurnos of Benchmark Company raised his price target on Roku’s stock from $300 to $410, as a result of the HBO deal.

“While we acknowledge that a lot of the good news already appears to be priced into the stock, we still anticipate a significant upside surprise in 4Q, driven by advertising strength bolstered by material CPM [ad-pricing] improvement, which should flow through into 2021,” the analyst wrote.

The latest run began around the time of Roku’s third-quarter earnings announcement in November, when the company posted revenue of $452 million, a 73 percent increase over the same time in 2019, while also posting a profit of $12 million.

“In Q3, Roku delivered outstanding financial and operational results led by robust demand for TV streaming products, strong growth in advertising and the expansion of content distribution partnerships,” the company said in its investors letter.  “As the ongoing COVID-19 pandemic continued to accelerate the shift of viewing away from traditional linear and pay TV, we continued to invest in competitive differentiation and execute well against our strategic plan.”

The company is now valued at around $43 billion.

The HBO Max deal doesn’t mean Roku is done with disputes. It was reported earlier this week that HBO is fighting with Charter Communications, the second-largest cable company in the United States and that Roku has blocked downloads of the Spectrum TV streaming app. The app does remain available for existing users, however.