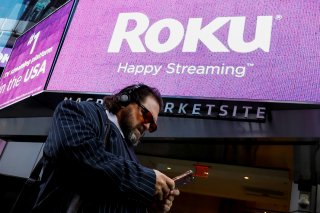 Roku, it’s clear, had a huge year in 2020. The pandemic drove users both to streaming and to purchasing new smart TVs and devices, and in that process, many of them turned to the Roku platform.

On Wednesday, Roku put out what it described as preliminary data, showing just how well they did in the fourth quarter, as well as on the year. It appeared the announcement was timed to Roku reaching the milestone of 50 million accounts.

Roku said that it added 14 million accounts in 2020, bringing its total to 51.2 million active accounts. Roku users also streamed 17 billion hours, meaning that in the year 2020, users streaming a total of 58.7 billion hours, marking a 55 percent year-over-year increase. Roku said it will announce its full fourth-quarter earnings in February.

“I’m excited that more than 50 million households now turn to Roku for their TV viewing,” Roku CEO Anthony Wood said in the announcement. “The world is moving to streaming and we look forward to continuing to help viewers, advertisers, content publishers, and TV manufacturers succeed in the Streaming Decade.”

An additional blog post from the company also touted Roku’s place in the cord-cutting revolution.

“We’ve always believed that all television would be streamed, and today we’re one step closer to that goal,” Wood said in the post. “Nearly one-third of U.S. households have cut traditional pay TV, according to Roku’s 2020 cord cutting study. Furthermore, eMarketer predicts that by the end of 2024, fewer than half of U.S. households will subscribe to a traditional pay TV service.”

The post also said that the amount of total streaming on the platform since 2016 adds up to 16 million years.

Roku also shared what the top searches were on the platform for each month of 2020. For January it was Joker, the film that was released the previous fall, and for February it was Frozen II. Once the pandemic began in March, it was for the movie Contagion, while the April and May winners were Trolls World Tour and Scoob!, both lockdown-era premium VOD releases. For four months, June through September, the top search was for Yellowstone, while in October, ahead of Halloween, it was Hocus Pocus. A Christmas movie, Elf, took top honors for both November and December.

Roku’s stock also surged throughout the year in 2020, trading at about $120 a share on the first day of 2020 and reaching about $326 a share as of Wednesday. The company’s stock got a boost each time Roku announced the end of one of its programming disputes, including when Roku finally reached a deal with AT&T, in mid-December, to carry HBO Max.