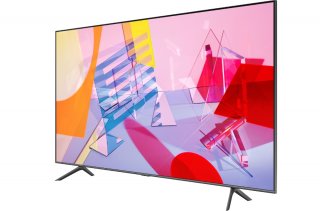 Not too many years ago, highly regarded QLED and OLED HDTV sets often retailed for thousands of dollars—well out of reach for many middle-class Americans.

Fast-forward to today and they have become much more affordable, often selling for under a grand. It really has become the golden age of HDTVs.

It’s no different with Samsung’s 58-inch Q60T Series, which can now be had for under $800 at Best Buy. This beauty is arguably one of the best HDTVs out there that’s in the under-60-inch range.

Not surprisingly, the 75- and even 80-inch-plus QLED and OLED monsters are getting more attention these days—and rightfully so— but if you want to keep your spending down to more reasonable levels, this is a deal you should take advantage of.

The Q60T Series offers a premium viewing experience thanks to its next-generation QLED tech and excellent overall image quality that boasts plenty-deep black levels. The set’s quantum dots let you experience images bursting with a dazzling range of more than a billion colors, each upscaled to incredible clarity driven by an intelligent 4K processor.

The high light output—a major strength of QLEDs—works extremely well with HDR, and you’ll surely enjoy the accurate colors and robust video processing, which will be a boon for hardcore gamers waiting for next-generation consoles from PlayStation and Xbox and lovers of intense action films.

Know that despite the fancy “QLED” name, these sets are basically LCD TVs with quantum dots—microscopic particles that when hit by light, emit a certain different colored light. The source of this light is the LED backlight, and that light must pass through more layers, such as the LCD layer, to produce the images on the screen.

The Q60T’s only real downside is its smart TV platform, which is powered by Tizen. First introduced in 2015 after years of development, the Tizen OS, much like Korean archrival LG’s webOS, has a pleasant stripped-down interface but it really lacks any real punch that is needed for today’s data-heavy streaming TV world.

Yes, Tizen offers access to popular run-of-the-mill apps like Netflix, Amazon, and Hulu, but a platform like Android TV or Roku will surely give you much more bang for your buck. Moreover, Tizen really isn’t that flexible when it comes to sideloading apps, which could affect the TV’s use in different markets and regions.

Despite these shortcomings, know that you no longer have to rely solely on the virtual assistant Bixby for voice control, as heavyweights Amazon Alexa and Google Assistant are now built in.

This TV is also fully compatible with the SmartThings App, which enables you to control and monitor your TV and connected devices via your smartphone. The wand-style, thoughtfully designed remote feels very comfortable in your hand and makes it simple to control basic functions.