Samsung’s Q90R 4K HDTV Is Not Worth the Money 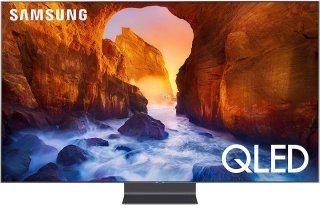 When it comes to HDTV picture quality, Samsung’s QLED panels have been playing second fiddle to their OLED counterparts for several years now.

More recently, however, in an effort to keep up tech-wise with the frequently highly praised OLED displays, prices for some QLED models have continued to trend upward—which has only thinned the wallets of many loyal Samsung customers.

A case in point is the 65-inch Q90R 4K HDTV, as it has already irked many with its ridiculously high price point. This particular model is currently going for $3,500, but if you add ten inches to it, the price tag jumps to a whopping $5,000.

Sure, the Q90R has made valiant strides to make it more competitive with OLED panels, but do the improvements really justify the sky-high price? At these levels, one could just as easily go with a quality OLED set like LG’s B9, C9, or CX and still end up saving a hefty wad of cash.

Keep in mind that despite the fancy “QLED” name, these sets are basically LCD TVs with quantum dots—microscopic particles that when hit by light, emit a certain different colored light. The source of this light is the LED backlight, and that light must pass through more layers, such as the LCD layer, to produce the images on the screen.

Compared to OLED panels, though, QLED TVs really don’t match up well. Tests after tests have shown that OLED TVs usually come out on top by boasting nearly perfect black levels, precise colors, wide-viewing angles, and outstanding uniformity and contrast ratio. In particular, QLEDs have often failed miserably when it comes to wide-angle viewing, in which the panel can lose contrast and look discolored or tainted if you happen to be stuck on the outside of seating areas.

These visual shortcomings can be blamed on the panel technology itself. As with all LCD-based displays, different areas of the screen can often appear brighter than others, and the backlighting can at times bleed through. When viewed at a side, the LCD layer has a certain thickness that can block some of the light coming through, and this is more pronounced at extreme angles.

As for the Q90R, there is no doubt that it can provide a premium viewing experience, but the price tag is just too high to ignore. If pricing really weren’t a concern, most would indeed be quite satisfied with what they are getting.

The set’s panel does feature a high light output—a major strength of QLEDs—and works extremely well with HDR, a major boon for die hard gamers waiting patiently for the next-generation consoles from PlayStation and Xbox and lovers of intense action films. Also know that the Q90R supports FreeSync, which helps to eliminate screen tearing and stuttering. The end result is noticeably smoother gameplay—no matter how graphics-intensive the games are.

The TV also comes with the ultra-cool Ambient Mode, enabling you to display a digital photo that matches the wall behind the panel. This set makes use of Samsung’s own Bixby digital assistant, which has shown to be a mixed bag for some users, in addition to industry giants Amazon Alexa and Google Assistant.