Samsung Makes QLED Computer Monitors (You Will Want One) 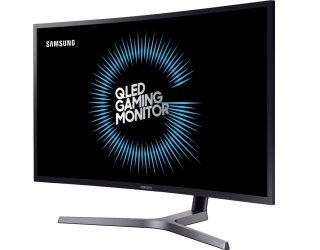 Samsung’s QLED panels are no strangers to rave reviews. If you eliminate the ultra-expensive LG OLEDs from the best-picture discussion, it will most likely be QLED TVs hoisting up the championship trophy.

What often gets overlooked among the available QLED offerings is Samsung’s monitors. Like their TV counterparts, these monitors take full advantage of the enhancing capabilities of quantum dot technology, which gives that extra color boost to ordinary LCD panels.

One particular Samsung monitor that’s been garnering strong reviews is the C32HG70, currently available for about $800, making it substantially more affordable than the Alienware AW3418DW.

Despite being a “gaming” monitor, it doesn’t feel that out of place in a home office or a bedroom—and it may even make that tedious work on spreadsheets a bit more enjoyable. The overall design is quite conservative, as it lacks bold colors and angular stylings. There is, however, a glowing ring in the back that imparts a futuristic vibe.

On the back of the monitor, there are two handy HDMI connections and one full-size DisplayPort. A single upstream USB-A 3.0 connection feeds into a pair of standard downstream USB 3.0 ports. One of the ports features extra power for fast-charging smartphones and other gadgets.

Although the monitor itself doesn’t have any speakers, a pair of 3.5mm audio inputs gives you the option of plugging into it your headphones or a gaming headset, so you don’t have to fiddle around with other wires from your PC.

As for the overall picture, the C32HG70 is able to deliver deep blacks and boasts a wide color gamut, which is great for watching content in HDR. As a gaming monitor, it really excels because of the low input lag and rapid response time of 144Hz. The HDR support and FreeSync for tear-free gaming will certainly make those graphic-intensive games even more entertaining.

As with most QLED TVs, the brightness level will never be a problem with this monitor, as the specs say that it can reach 600 nits in HDR mode. However, like other similar panels, the image can degrade somewhat when viewed at extreme angles. Another sour point is that there can be slight warping at the curved ends of the panel.

Despite those minor hiccups, this Samsung monitor, priced well under a grand, is still a solid choice for both hardcore gamers and remote workers who want to add some muscle to their home offices.