Samsung's Odyssey G7, A Curved QLED Monitor for Gamers, Is Open for Preorders 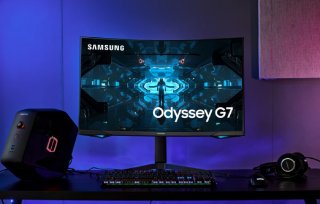 Samsung, back at CES in January, unveiled numerous QLED TVs. They also debuted a new, curved gaming monitor, the Odyssey G7, which is now available for preorder.

The company had also announced a 49-inch G9 curved monitor at CES, which ups the resolution to 5120x1440. It’s not clear when that monitor will become available.

“Samsung is maintaining its position as the global gaming monitor market leader with continued innovation in creating immersive, next-generation gaming experiences, pushing the boundaries of what is possible,”  Hyesung Ha, Senior Vice President of Visual Display Business at Samsung Electronics, said as part of the announcement.

The monitors also feature an adjustable stand, which allows users to switch the monitors to a vertical orientation, and it can also be wall-mounted.

“The Odyssey G7 comes with a 1000R curvature, which means the center point of its radius is at 1000 mm, or about 3 feet away,” Toms’s Hardware wrote of the monitor. “That might not sound like much, but it's extremely tight for a monitor and a world-first.

Samsung has, in recent weeks, been rolling out many of its 2020 QLED TVs. The Sero TV, a TV that rotates into a vertical mode for those wished to watch social media videos taken in portrait mode, came available for sale earlier this week. The company also unveiled The Terrace, a QLED outdoor TV, which like the Sero is available as part of Samsung's 2020 Lifestyle TV Line.