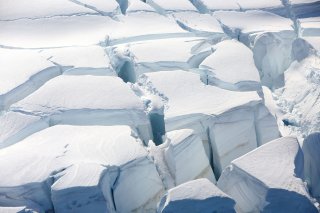 The study, published in the journal Nature Communications Earth and Environment, tapped into nearly forty years of satellite data from more than two hundred large glaciers to settle on the troubling findings—which revealed that Greenland’s massive ice sheet has indeed passed the point of no return.

“Glacier retreat has knocked the dynamics of the whole ice sheet into a constant state of loss,” the study’s co-author Ian Howat, an earth scientist from Ohio State University, said in a statement.

“Even if the climate were to stay the same or even get a little colder, the ice sheet would still be losing mass.”

Projecting that trend forward, the ice sheet is expected to lose mass ninety-nine out of every hundred years, the researchers noted.

The problem stems from the fact that snowfalls that replenish the ice sheet each year are not able to keep up with the melt rate of the glaciers.

“We’ve been looking at these remote sensing observations to study how ice discharge and accumulation have varied,” the study’s lead author, Michalea King, a researcher at Ohio State University, said in a statement.

“And what we’ve found is that the ice that’s discharging into the ocean is far surpassing the snow that’s accumulating on the surface of the ice sheet.”

According to the National Oceanic and Atmospheric Administration, ice loss from the Greenland ice sheet surged sevenfold from thirty-four billion tons a year from 1992 to 2001 to 247 billion tons annually from 2012 to 2016.

Greenland’s shrinking glaciers are a leading contributor to sea-level rise across the world. By the end of the century, the global sea level will likely be a foot higher than what was seen in 2000, according to NOAA.

Just last year, enough ice melted or broke off from the Greenland ice sheet to cause the oceans to rise by 2.2 millimeters in only two months.

The study’s findings are indeed bleak, but King noted that such data could be useful for future strategies that tackle climate change.

“It’s always a positive thing to learn more about glacier environments, because we can only improve our predictions for how rapidly things will change in the future,” she said.

“And that can only help us with adaptation and mitigation strategies. The more we know, the better we can prepare.”