Should Periods Be Followed by One Space, or Two? Microsoft Has Decided. 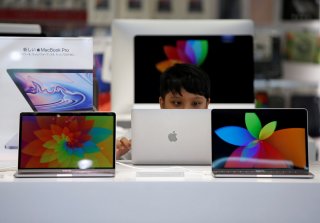 It's been a long-running battle among writers, editors, some software coders and others: Should periods be followed by one space, or two?

In the early twentieth century, two spaces were the norm, while one space had become the standard by the 1950s. These days, most style guides, including the Chicago Manual of Style and the Oxford Style Manual, mandate a single space. Even so, some have remained two-space holdouts, including many typewriter enthusiasts.

In recent days, there's been a report of a subtle change that could have big implications for this debate. Law professor Alan Chen tweeted Friday that he had noticed that "the one-spacers have won. Microsoft Word now showing 2 spaces after a period as an error."

Microsoft doesn't appear to have made any announcement or confirmation of Chen's discovery, and when The National Interest reached out, Microsoft had no comment. According to Softpedia, Microsoft was already "offering settings to switch to a one-space rule in Microsoft Office for many years already."

The news led to differing reactions on social media, depending on whether people stand on the spacing question.

"This is an epoch-making event," said lawyer and regular presidential antagonist George Conway.

"I feel like everything I’ve ever believed in as right and true has disappeared," Salesforce executive Amy E. Weaver said. "And don’t even start with me about Pluto."

"Two spaces is like making a hat-tipping motion when you're not wearing that kind of hat and don't even know anyone who ever wore that kind of hat," Howard Mittlemark tweeted.

"I knew it would happen eventually!," professor Becky Keene tweeted. "Next up: Oxford comma."

"Remember this moment, you savages: remember how we stole history from your hands," writer Ben Philippe tweeted. "Your warped way of life died with a whimper that the world barely noticed."

"Unacceptable," Tweeter @manintegrated said. "If I can't trust a Bill Gates product to properly space sentences, why should I trust his vaccine?" Gates, alas, no longer has day-to-day responsibilities at Microsoft, and almost certainly had nothing to do with any spacing decision.

Even if the change has been made, it’s merely listed as an error, and uses of the software may continue to use two spaces to their hearts’ content.